Faced with the collapse of their argument that income inequality has risen dramatically in recent decades, Sen. Elizabeth Warren’s favorite economists have come back with an even more audacious claim. And some members of the press corps seem eager to buy it.

“The Rich Really Do Pay Lower Taxes Than You,” asserts a New York Times headline above a column from David Leonhardt. The column contains a related assertion that is perhaps even more striking:

For the first time on record, the 400 wealthiest Americans last year paid a lower total tax rate — spanning federal, state and local taxes — than any other income group, according to newly released data. ...

David Splinter of Congress’s Joint Committee on Taxation writes in a new paper [U.S. Taxes Are Progressive: Comment on “Progressive Wealth Taxation”] that, just as you would expect, the rich in America do pay higher tax rates than the poor, according to a range of sources [see also Income Inequality in the United States: Using Tax Data to Measure Long-term Trends]. ...

Mr. Splinter documents the Saez-Zucman errors at length, and he’s not the only one finding flaws in the work of Sen. Warren’s favorite economists. Former Obama Council of Economic Advisers Chairman Jason Furman took to Twitter this week to point out that U.S. high-income earners pay at a higher rate than low-income earners, both before and after accounting for state and local taxation. 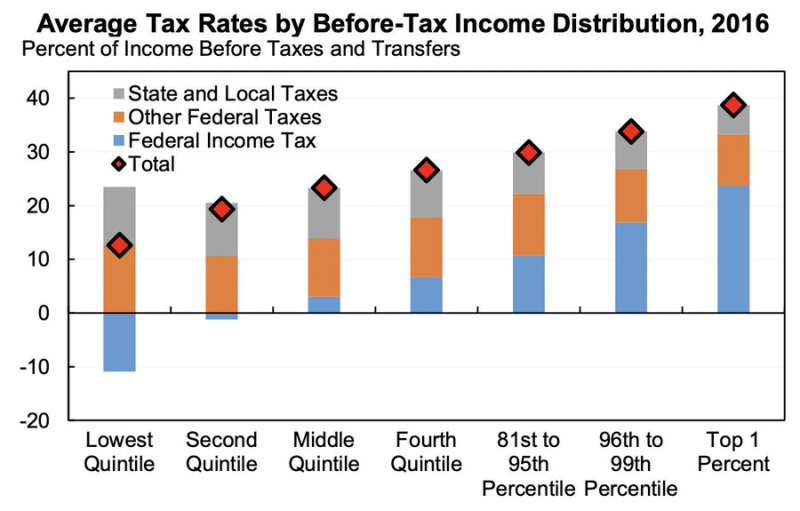 ... Maybe one of Sen. Warren’s opponents at next week’s Democratic debate will challenge her on the inequality muddle at the heart of her economic policy.