Women on social media face disproportionate levels of harassment compared to men. A new study says that female academics also have disproportionately fewer Twitter followers, likes and retweets than their male counterparts on the platform, regardless of their Twitter activity levels or professional rank. 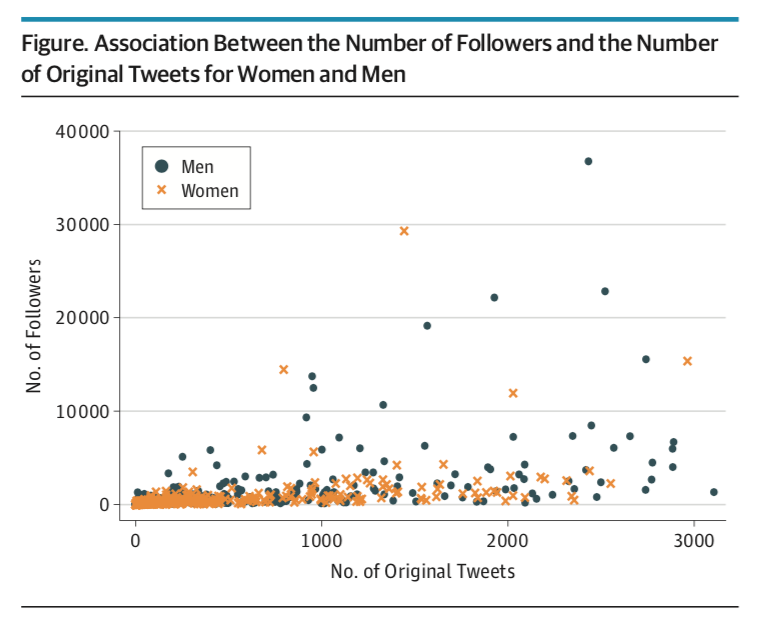 Observers of gender dynamics, casual or expert, probably won’t be surprised by the findings. But they do have implications for scientific impact and careers and the general sharing of information. And because this study, in particular, involved health policy and health services researchers, there are implications for public health. So it’s important to understand what’s happening, and why -- as best we can, since the study was more quantitative analysis than a deep dive into the psychology of Twitter.

The short answer, said lead author Jane M. Zhu, assistant professor of medicine at Oregon Health and Sciences University and a senior adjunct fellow in health economics at the University of Pennsylvania, is that the “same power dynamics that exist in the real-world office settings seem to exist online.” ...

How many fewer followers do women get than men? Half. ...

The study, published in JAMA Internal Medicine, notes that men and women are using Twitter at equal rates, and that social media offers women “opportunities for engagement, perhaps with fewer barriers than may be present in day-to-day academic interactions.” The gender disparity was also less pronounced at lower ranks, suggesting things may be changing.

Yet while some have hoped that social media would “help level the playing field in academic medicine by giving women an accessible and equitable platform on which to present themselves,” it says, the danger is that these forums “may do little to improve gender parity and may instead reinforce disparities.”

Now the Twitter mob must raise their pitchforks and chase themselves out of town. Amen!

Maybe they have less to say?

Well, the Twitter users that follow the male academics are obviously hate women. Disproportionate likes and follows are a hate crime!!! Congress MUST investigate and pass legislation to ensure equal Twitter likes and followers for all!!!