The Truth About Who Pays What In Taxes

Wall Street Journal, Who Pays What in Taxes? The Answer Isn't So Simple.: 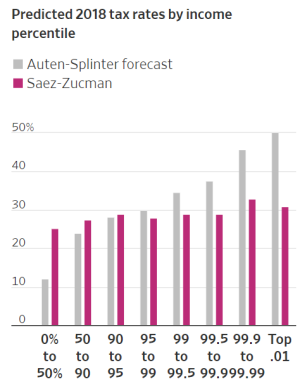 It is a tax policy question with a seemingly simple answer: Who pays what?

In reality, how taxes are distributed across income groups is hotly debated by economists—with enormous policy consequences. New findings by economists Emmanuel Saez and Gabriel Zucman of the University of California, Berkeley, have added fuel to this debate, challenging the conventional view that the poor pay relatively little and that effective tax rates rise with income.

In their new book, “The Triumph of Injustice: How the Rich Dodge Taxes and How to Make Them Pay,” Messrs. Saez and Zucman find that tax rates, including state and local taxes, are roughly flat, ranging between 24% and 30% across most income groups. Then, they focus on the 400 highest-income adults and find a 23% tax rate, lower than any other group for the first time.

That conclusion challenges the view espoused by lawmakers and tax analysts affiliated with both parties that the U.S. has a progressive tax system. According to the Congressional Budget Office, the top 1% of households paid an average federal tax rate of 33% while the bottom one-fifth has a federal tax rate below 2%. Estimates including state and local taxes show somewhat higher taxes at the bottom.

Messrs. Saez and Zucman use their findings to prescribe sharply higher taxes on the rich, including an annual wealth tax, global coordination to raise corporate taxes and tougher enforcement. Democratic presidential candidates Bernie Sanders and Elizabeth Warren have endorsed a wealth tax, and both rely on Saez-Zucman estimates.

But the conclusions of Messrs. Saez and Zucman have been met with skepticism from some other economists who differ on how to assess and describe tax burdens. They split on what should count as income and taxes and on how varying techniques fill gaps in publicly available data.

“There is a very wide range where the truth may lie,” said Wojciech Kopczuk, a Columbia University economist who has been critical of the Saez-Zucman approach. ...

David Splinter, an economist with Congress’s Joint Committee on Taxation, counts the earned-income tax credit as income but doesn’t use the sum to reduce the net tax burden in his estimates. In a public response last week to Messrs. Saez and Zucman, he estimated the tax rate on lower-income households at 13%, compared with the Saez-Zucman method’s 24%.

Washington Post editorial, The Truth About Taxation in America:

Who says economics is the dismal science? Last week saw some positively scintillating intellectual combat between marquee-name practitioners, with the social media impact measurable in hundreds of likes and retweets. What’s more, there were real-world implications for how to measure a major social issue — inequality — and how to deal with it.

Both sides in this polite quarrel agree that inequality is a major problem and that recent changes in tax policy, especially the upwardly skewed Trump tax cuts, have worsened matters — and we agree. In policy terms, however, it matters which description of the problem you accept, because that choice implies how many risks — political and economic — you are willing to take to maximize taxation of the rich.

Mr. Saez and Mr. Zucman, who have advised Democratic presidential candidate Sen. Elizabeth Warren on her wealth tax, believe Democrats have been far too timid in the past. Yet the administration Mr. Furman served backed an expanded EITC and higher individual income tax rates, leavened by growth-enhancing corporate rate reductions (with fewer loopholes), regarding that policy mix as socially progressive, economically efficient — and politically achievable. We hope that the most recent Democratic administration’s pragmatic spirit can survive the bruising debates, intellectual and otherwise, of 2020.

New York Times op-ed: Should We Soak the Rich? You Bet!, by Nicholas Kristof