If we’re seeking to adopt some measure to assess scholarly impact, there are serious caveats that need to be addressed before we begin.

Professor Robert Anderson at Pepperdine Law School (place from which I wouldn’t mind a job offer — HINT) [How can we make you an offer (or measure your scholarly impact or teaching effectiveness) if we don't know who you are?] asked me a series of questions on Twitter, all of which are important.

If you don’t know Professor Anderson, you should.  His Twitter feed is a discussion of scholarly impact, and things related to problems of measurement and hierarchies in academia.  I’ve found his tweets cause me to think.  I blame him for this blog post.

His tweet that got me to thinking was this one:  “My pal @lawprofblawg has got some points here, but I think at some point s/he has got to get a little more concrete with an alternative. Is the status quo working? Why would citation-based metrics be worse? Should law schools evaluate scholarship at all? How should hiring work?”

All good questions.  There was some discussion in that thread about the fact that we ought to have some measure of stuff.  In fact, we already do when we hire people to join the faculty, when they go up for tenure, and even (to varying degrees of noneffectiveness) when we review them post-tenure.  They are imperfect, filled with biases, and are often deployed in an arbitrary fashion.  Sometimes they are hardly metrics at all.

Nonetheless, Professor Anderson is correct: I am in favor of having some metrics.  However, the current metrics aren’t working.   My coauthor and I have explained the biases and entry barriers facing certain potential entrants into legal academia.  Eric Segall and Adam Feldman have explained that there is severe concentration in the legal academy, focused on only a handful of schools that produce the bulk of law professors.  While in the academy, barriers block advancement.  And those barriers are reflected, in my opinion, in current citation and scholarly impact measurements seeking to measure stuff.

But if we’re seeking to adopt some measure, whether it is a global standard that could ultimately replace U.S. News or just a standard at one’s own law school, I think there are serious caveats that need to be addressed before we begin to measure stuff.  When I have seen these issues raised before, I have seen them too quickly dismissed.  So let’s try again.

TempDean, my frequent coauthor on Above the Law, pointed out that “the only metric that matters is: Will anyone care 20 years after we’re gone? And no one wins.” That’s a pretty harsh indictment. But it is also consistent with my concern about how law professors search for meaning. 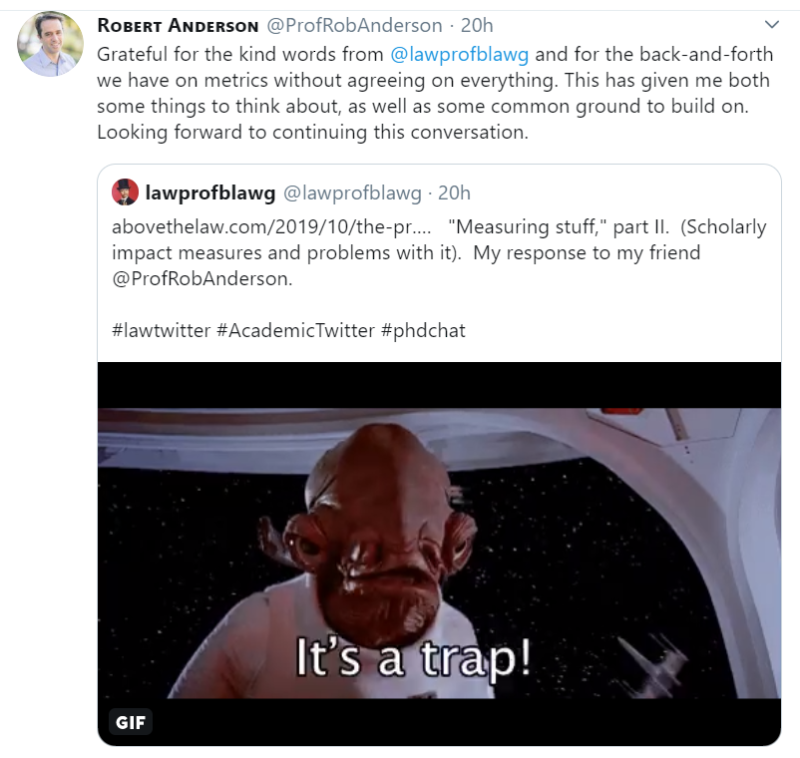