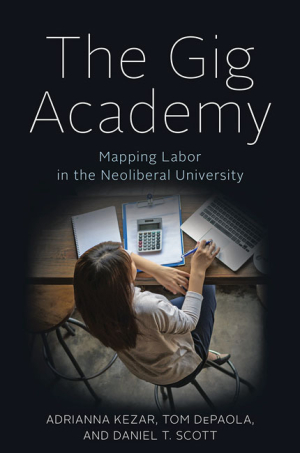 Over the past two decades, higher education employment has undergone a radical transformation with faculty becoming contingent, staff being outsourced, and postdocs and graduate students becoming a larger share of the workforce. For example, the faculty has shifted from one composed mostly of tenure-track, full-time employees to one made up of contingent, part-time teachers. Non-tenure-track instructors now make up 70 percent of college faculty. Their pay for teaching eight courses averages $22,400 a year—less than the annual salary of most fast-food workers.

In The Gig Academy, Adrianna Kezar, Tom DePaola, and Daniel T. Scott assess the impact of this disturbing workforce development. Providing an overarching framework that takes the concept of the gig economy and applies it to the university workforce, this book scrutinizes labor restructuring across both academic and nonacademic spheres. By synthesizing these employment trends, the book reveals the magnitude of the problem for individual workers across all institutional types and job categories while illustrating the damaging effects of these changes on student outcomes, campus community, and institutional effectiveness. A pointed critique of contemporary neoliberalism, the book also includes an analysis of the growing divide between employees and administrators.

The authors conclude by examining the strengthening state of unionization among university workers. Advocating a collectivist, action-oriented vision for reversing the tide of exploitation, Kezar, DePaola, and Scott urge readers to use the book as a tool to interrogate the state of working relations on their own campuses and fight for a system that is run democratically for the benefit of all. Ultimately, The Gig Academy is a call to arms, one that encourages non-tenure-track faculty, staff, postdocs, graduate students, and administrative and tenure-track allies to unite in a common struggle against the neoliberal Gig Academy.

Inside Higher Ed, ‘The Gig Academy’:

Adrianna Kezar, professor of higher education at the University of Southern California and director of its Pullias Center for Higher Education, has devoted much of her professional career to fighting the adjunctification of academe. And while adjuncts themselves make a strong case against it, Kezar has bolstered their cause with her own research and activism. Their cause is her cause. ...

Kezar and her colleagues describe the gig academy in a way that at first sounds like Uber, not academe: “A cheap and deprofessionalized workforce, fissured workers through outsourcing, automation and uses of technology to reduce labor costs, offloading reproduction costs onto employees, an ethic of micro-entrepreneurship, and managerial control over labor supply and demand.”

But as Kezar continues to describe how academic labor has shifted over the past two decades from approximately 70 percent of professors being tenured or tenure track to 70 percent non-tenure track today, the metaphor becomes apt. Adjunct or part-time faculty salaries, in particular, are low, and many adjuncts have the job security of fast-food workers. ...

But Gig Academy's analysis isn't limited to the faculty. It notes that academic and support staff members, librarians, curators, archivists, and postdoctoral fellows have all suffered steep cuts to their ranks in recent years, as well. Many office and administrative staff are now part-time. Many earn subpoverty wages. Even core functions such as information technology and admissions are being targeted for outsourcing. And the redistributed workload onto all these remaining workers is demoralizing at best. Graduate student labor is a key part of the gig academy, too, often at the expense of these students’ mental health.

Kezar and her colleagues do note one major difference between the gig economy and the gig academy: the rise of the human “buffer” between administrators and workers. Whereas Uber and its ilk have technology mediate between workers and managers, the academy hasn’t quite caught up. And so professional or midlevel administrative positions increased by 2.5 to 5 percent per year between 2000 and 2012, the book notes -- part of why instructional cost cutting has not been reflected in overall costs. These professionals can of course be more easily “controlled” by higher-level administrators than can faculty members, the book says, but to what end?