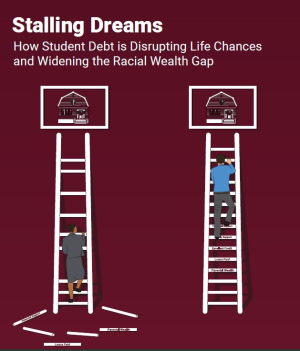 The student loan system, designed to provide greater access to higher education and fill gaps in students’ ability to pay, has turned into a debt sentence for more and more borrowers. It’s a story blending some well-intended actors and policy, some nefarious and predatory financial actors, for-profit education factories, and growth in education costs far exceeding inflation due in large part to declining public investments. This report focuses on the consequences. What changed trajectories is this system establishing for generations of young adults? How has this changed the future for young people? What are the long-term effects of this burgeoning debt crisis? What is its cascading impact on financial well-being, families, and society? How does it affect young people differently by race and ethnicity? This report begins to take up these critical questions. Any solutions must address these issues.

The current higher education financing regime sediments and exacerbates inequality, and student loans adversely affect the Black-White racial wealth gap. Black students—and students at for-profit universities, who are more likely to be students of color—often face the greatest challenges as they try to finance their degrees with student loans. They take on more loans, amass higher amounts of loans, and experience greater difficulty in paying off loans. Frequently without family financial wealth to support repayment and facing ongoing discrimination in the labor market, Black borrowers are much more likely to experience longterm financial insecurity due to student loans. Would anybody knowingly design a system where, two decades after starting college, many Black borrowers still are paying on virtually all of their student loans, while for the typical White borrower, a minimal debt burden remains? Would anybody knowingly design a system whereby 38 elite colleges have more students who come from families in the top 1 percent than students who come from the bottom 60 percent? Elite colleges, to be sure, historically served upper-class White males, yet access gained by women and students of color has created only a lukewarm diversity in the context of today’s higher education financing regime.

This report highlights how student loans often create a long-term debt burden that blocks wealth accumulation, rendering mobility more fragile and impeding long-term security, particularly for young Black borrowers. While the crisis has grown nationally for all groups in recent years, the data below underscore that Black students are particularly harmed by the current student loan system. The role of higher education financing in contributing to the racial wealth gap and its widening are detailed in this report. ...

Black students are more likely than their White peers to take on student debt, to take larger amounts of loans, and to have debt decades after pursuing higher education.15 In a cohort of students starting college in 1995-1996 and followed for 20 years, 43 percent of White students did have to take any student loans compared to just a quarter of Black students. Among all students, not just student loan holders, the median total for undergraduate loans for Black students was 3.5 times greater than for their White peers and about 3 times more for total federal loans overall including graduate loans.

The typical Black student borrower took out about $3,000 more in loans than their White peers; yet 20 years after starting school, the typical Black borrower owed about $17,500 more than their White peers (see Figure 1). In that time, nearly half of White borrowers were student debt free (49 percent), while just a quarter of Black borrowers were able to pay off all of their loans (26 percent). 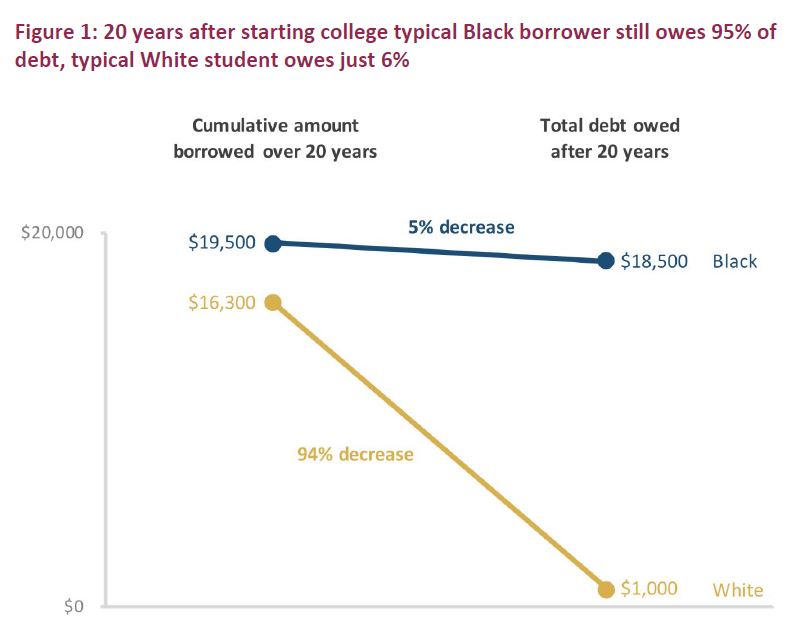 Two decades after beginning their degrees, the median Black student borrower has $18,500 in loans remaining, while the median White borrower holds just $1,000 in loans. In other words, in 20 years, the median debt of White borrowing students has been reduced by 94 percent— with almost half holding no student debt—whereas Black borrowers at the median still owe 95 percent of their cumulative borrowing total. This difference dramatically captures the racialized impact of this higher education financing regime. While student loans once aimed to improve economic trajectories of young people by expanding opportunity, for many, particularly Black students, small debt burdens have been replaced by large debt loads that anchor students in a position of economic jeopardy. Rather than serving as a springboard, the loans serve as an anchor keeping young Black adults in an uncertain economic precarity.

Did they account for differences in college degree programs pursued? Job types and salaries taken after graduation? Or even graduation rates? What isn't mentioned (at least in this synopsis) screams louder than what is mentioned.