The Financial Transaction Tax: A Progressive Tax With Beneficial Effects

A small tax on financial transactions, such as a one-tenth of 1 percent levy on the purchase of stocks and bonds, would likely end the viability of high-frequency trading while raising consequential sums for the U.S. Treasury. Opponents of this proposal have claimed it would hinder the ability of middle-class families to save for retirement. In contrast, we conclude that the costs of a modest financial transaction tax (FTT) would be little to nothing for middle-income families and would be easily manageable for average families in top income bracket. 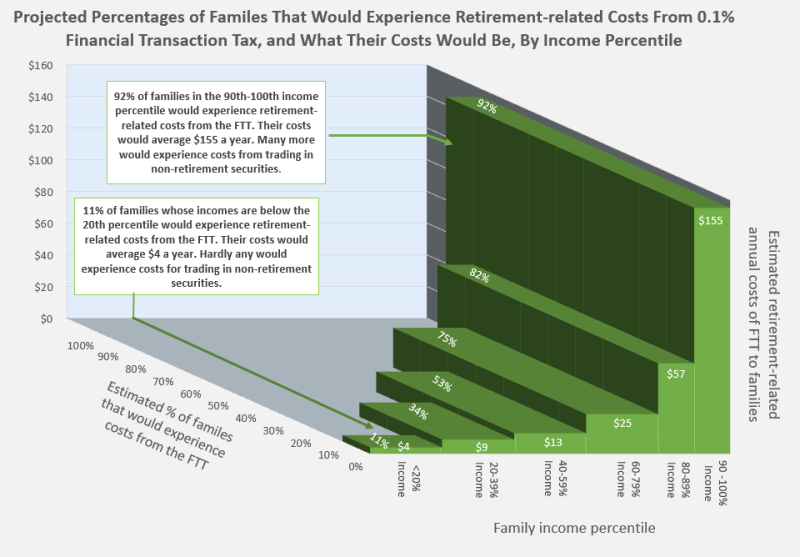 Conclusion
A financial transaction tax, such as the one proposed in the Wall Street Tax Act, has the potential to raise meaningful amounts of revenue with minimal impact on ordinary Americans. Even its prospective effect on average families in the top income tier is not particularly onerous.

Slamming the breaks on high-speed trading would good for just about all Americans except for those who benefit by treating Wall Street like a casino. Faced with the prospect of less action, Wall Street’s croupiers will warn of harms to ordinary Americans from an FTT. Evaluators of those forecasts should consider the industry’s incentives.

Those who endorse the concept of a more progressive tax code, meanwhile, should find much to like in a financial transaction tax because it would apply roughly proportionately to families’ holdings in securities, and those holdings disproportionately belong to the wealthiest Americans.

Critics of proposed public investments – such as those to improve the nation’s health, increase access to education, and address climate change – often base their opposition on affordability grounds. A financial transaction tax would offer a way to make a down payment on long-term investments in the nation’s welfare that would be paid almost entirely by those who clearly can afford it.

So I guess we’ve totally abandoned the concept of only taxing activities that impose some sort of societal cost on government, and are justifying any tax that can add to the federal fisc, regardless of the activity. Not surprising, since we’ve already crossed the line and tax non-activity (e.g., failing to purchase health insurance). Of course, this one will be rationalized that it can raise a lot of bacon and only a few of the pigs will squeal. It does seem odd though that we are taxing an activity that we supposedly want to encourage (people planning for their financial future through saving and investing and generating capital for the private sector to make productive use). And once the siren’s song has worked its seductive charm, the pols will have a hard time not ramping up the rates every time they decide they need more money to do “God’s work.”

Dean Baker has been agitating for a financial transactions tax (FTT) for years. So, in my own humble way, have I. On that subject, here are links to a 2016 piece by Baker and my more recent op-ed in the New York Daily News.

You can effectively shut down the high frequency traders (who provide no redeeming value to the investment world or society) with a tax at half or less than the 0.1% rate. Emphasizing the elimination of them should be the focus rather than viewing it as a significant source of revenue.

Paul B: There's nothing wrong with viewing an FTT as a significant source of federal revenue. Aren't we running a huge deficit?

Rural counsel: 99.9% of all trading is simply one person buying another person's shares. Except for IPOs, none of this trading generates any capital for the private sector to put to productive use.