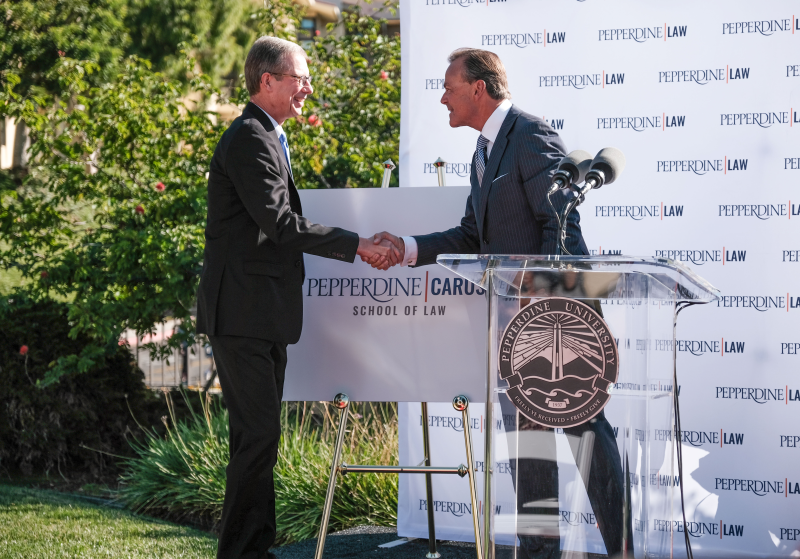 Business innovator, civic leader, and philanthropist Rick J. Caruso (JD ’83) and his wife, Tina, have made a generous $50 million commitment to the Pepperdine School of Law, which will be named the Rick J. Caruso School of Law in recognition of the historic gift. The contribution, made through the Caruso Family Foundation, will expand educational access to exceptional, historically underserved student populations—a hallmark of the Caruso family’s philanthropic efforts in the Los Angeles area and beyond—as well as fuel several initiatives to strengthen the School of Law’s academic programming. In addition, Rick will partner with the School of Law to raise an additional $50 million in endowment funds over the next decade to continue and expand these initiatives to cement Pepperdine’s place among America’s leading law schools.

“The lack of affordable education in our nation and the student debt crisis is not only inhibiting underprivileged students from gaining equal opportunity to education, but also discouraging potential students from exploring careers in public service, roles that have a critical impact on society,” said Rick. “My sincere hope is that this gift will be one of the first steps towards reducing the barrier to entry for these students and will inspire the next generation of public servants.”

Founded in 1969, the School of Law has remained committed to both academic excellence and its Christian faith heritage that serves a diverse student-focused community. This gift demonstrates the Carusos’ devotion to faith-based education, especially for students who are unable to access life-changing higher education of the highest quality.

“Since 1981, the Caruso family has made extraordinary contributions to Pepperdine’s rise, especially at the School of Law, through their dedicated stewardship,” said Pepperdine president Jim Gash. “This latest gift from Rick and Tina Caruso, made possible by decades of friendship between the Carusos and Pepperdine senior leadership, namely President Emeritus Andrew K. Benton and Senior Vice Chancellor and School of Law Dean Emeritus Ronald F. Phillips, will equip the School of Law to attract extraordinary students drawn to Pepperdine’s unique mission, provide them with enhanced legal training, and launch them into impactful careers that will honor God and change lives. With the Carusos’ unwavering support and the daily work of our students, faculty, and staff, I am confident that the future of Pepperdine and the School of Law is brighter than ever.

In 1994, Rick and Tina created the Rick J. Caruso Research Fellows Program, which supports the ongoing scholarly work of the School of Law’s faculty, and in 1998 created the Caruso Family Chair in Law. They have also established the Caruso Family Loan Forgiveness Fund—an endowed fund for graduates who are dedicated to a career in public service. To date, 70 students have received financial support through the program. This latest gift will expand the loan forgiveness program, enabling more students to pursue fulfilling careers serving the public by reducing the amount of their student debt.

“The generosity and commitment demonstrated by Rick Caruso and his family have for decades driven the entire School of Law forward,” said Paul Caron, dean of the School of Law. “With the School of Law currently enjoying its second-highest ranking among the nation’s law schools in its 50-year history, we are well-positioned with this gift to reach even higher in the years to come.”

On Wednesday, Pepperdine law school will announce its largest-ever gift, $50 million from the Carusos to help low-income and other underserved students attend, pay off student loans and pursue public service careers. The Carusos also have pledged to help raise an additional $50 million over the next decade for an endowment to keep the financial aid sustainable. ...

Paul L. Caron, Pepperdine law school dean, said the average loan debt of his students is $144,000. More than half of the typical incoming class of 160 students receive scholarships ranging from $5,000 to $57,000, the annual tuition. Most awards are based on financial need and merit — an applicant’s college GPA and law school exam score. The Caruso gift will allow the school to double the percentage of scholarship funds for underserved students to about 30%, Caron said.

The school also will be able to dramatically expand a loan forgiveness program the Carusos started more than a decade ago. The program has helped about 70 students pay off their debt if they enter public service — seven recipients with five years of public service, for instance, have received an average award of $42,670.

With the new gift, Caron said, Pepperdine hopes to help all students who qualify for the Caruso Loan Forgiveness Fund cover their law school loan payments for 10 years. After that, a federal program forgives the balance owed for those who stayed in public or non-profit service.

In addition, the law school plans to use the funds to hire more faculty and boost research.

This is definitely in the category of "Wow!" gifts to law schools.

Caruso’s $50 million law school donation looks to be among the five largest in history. ... Additionally, Caruso and his wife, Tina, have pledged to help raise another $50 million over the next decade to endow that financial assistance and ensure it’s available for the long term.

... Founded in 1969, the School of Law has remained committed to both academic excellence and its Christian faith heritage that serves a diverse student-focused community. This gift demonstrates the Carusos’ devotion to faith-based education, especially for students who are unable to access life-changing higher education of the highest quality.”

Local mall developer Rick Caruso has committed to give $50 million to Pepperdine University's School of Law to help low-income students and strengthen the school’s academic programs, the university announced Oct. 23. ...

Rick and Tina Caruso have been known in recent years for their philanthropic gifts to Rick Caruso’s undergraduate alma mater, USC, where he is chairman of the board of trustees. But they have also given to Pepperdine over the years. In 1994, they established a fellows program to support scholarly work of law school faculty, and in 1998 they created the Caruso Family Chair in Law. The couple also had previously established a loan forgiveness fund for Pepperdine School of Law graduates who are dedicated to a career in public service; to date, 70 students have received financial support through the program.

Thank you Mr. and Mrs. Caruso for supporting a law school that has truly stepped out of the ivory tower to make knowledge and a voice accessible to all!!

It seems $50 million is worth ruining all their graduates' resumes, speaker introductions, etc.