This fall, the University of Minnesota Law School saw its largest entering juris doctorate class in eight years. The school is recovering after a decline in enrollment following the 2008 recession.

Reasons why enrollment is bouncing back at the law school range from a strong economy, the school’s high ranking and the current political climate, according to students and those in the industry. 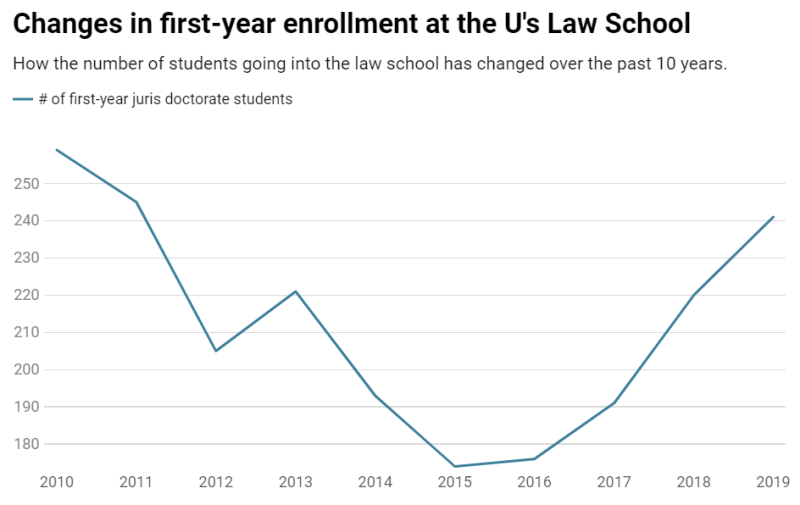 Coined the “Trump bump," many speculate the rise in law school enrollment across the country can be, in part, attributed to the political climate. The idea is that some students, upset about actions by President Donald Trump, feel motivated to create change. ... While there is speculation about the “Trump Bump” theory, [Minnesota] Law School Dean Garry Jenkins said that on a national level, law school applications declined last year. This decline indicates that the political climate may not have been the largest force affecting applications. “I’m not sure if the 'Trump Bump' is true anymore,” he said. ...

The school is on a three-year plan to pull itself out of the budget deficit and is currently on track to meet its goal.

I think TaxProf should stop printing U of M's propaganda. Slowing a precipitous decline is not improvement. U of M decided to embrace political correctness and it has never completely recovered

The lede answers the question: Minn Law is enrolling a record 1L class because it is rocking a multi-million deficit. We've seen this song and dance hundreds of times since the Great Recession and Law School Crisis.