James Comey Reduced Fee To $54,000 For Speech On 'The Ethical Leader' At UNLV Law School

Following up on my previous post, James Comey's Five Principles Of Ethical Leadership For Law School Deans:  The Nevada Independent, UNLV Paid Comey $54,000, Funded by Donors, For Visit to Law School and Dinner with VIPs: 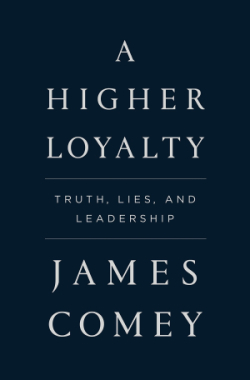 Former FBI Director James Comey’s visit to UNLV last month for a moderated discussion with former Gov. Brian Sandoval, book signing and dinner with up to two dozen “VIPs” cost the university’s law school $54,000, according to records obtained by The Nevada Independent.

According to a contract between the university and a booking agency representing Comey, the former FBI director’s September 24 visit to UNLV and speech to the university, “The Ethical Leader,” cost the university’s law school a pretty penny, but a spokeswoman for the university said that all costs were paid by a donor and that Comey reduced his normal speaking fee for the event.

“Mr. Comey substantially reduced his customary rate because the address was made at a public university for the benefit of our students and he was able to tie in this engagement with other West Coast events,” UNLV spokeswoman Cindy Brown said in an email. ...

The contract offers a behind-the-scenes look into the benefits, requirements and accommodations that the university made to Comey. ... Per the contract, the $54,000 fee included transportation to and from the airport, hotel (The Bellagio) and university for the event and other meetings, which ran for nearly six hours. ...

Post event, the contract also called for a two-hour “Dinner offsite with invited guests.” Brown said in an email that the dinner, which was attended by about 15 people, was a fundraiser for the law school’s “Law and Leadership Program,” and that a donor covered the costs of the dinner.

"Ethics" are neutral. Pirates have ethics, they are pirate ethics. The mob has ethics, they are the mob ethics, like "code of silence" for example. What are the ethics of Nevada University?

It's nice to see Comey monetizing his attempted destructions of one presidential candidate and one actual President. I wish him well.

tuphat, I thought whataboutism was a concept we were all supposed to follow these days. Let's talk about Comey's fee and fundraising, not Trump Jr. Or do the "rules" only go one way. Don't bother, I know the answer.

So a criminally corrupt denizen of our failed FBI gets big bucks for lying about ethics at a failing CA college, you just can't make this stuff up.

Nice work if you can get it.