The lawsuit Students For Fair Admissions v. Harvard University provided an unprecedented look at how an elite school makes admissions decisions. Using publicly released reports, we examine the preferences Harvard gives for recruited athletes, legacies, those on the dean’s interest list, and children of faculty and staff (ALDCs). Among white admits, over 43% are ALDC. Among admits who are African American, Asian American, and Hispanic, the share is less than 16% each. Our model of admissions shows that roughly three quarters of white ALDC admits would have been rejected if they had been treated as white non-ALDCs. Removing preferences for athletes and legacies would significantly alter the racial distribution of admitted students, with the share of white admits falling and all other groups rising or remaining unchanged. 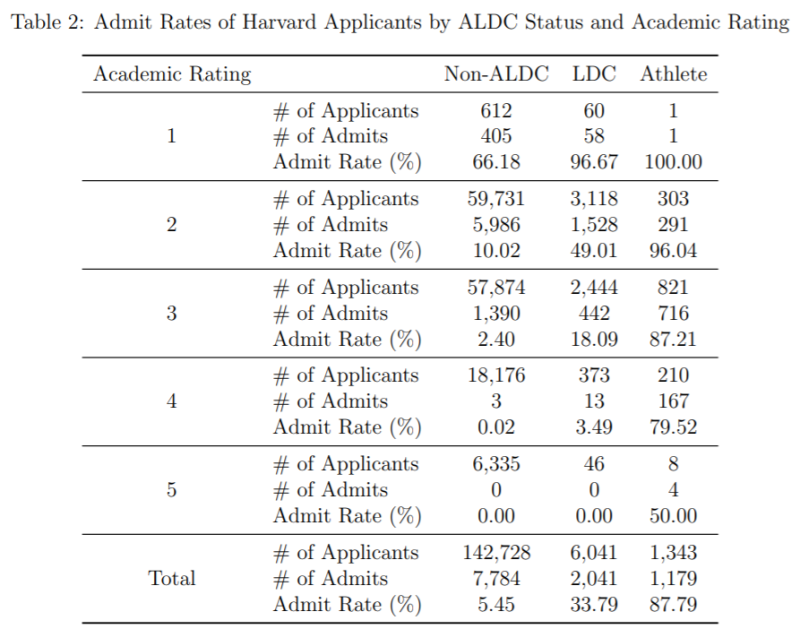 It's never just the tip.
NEVER.

Doesn't make sense to me but I hear there are other trust fund babies to hang out with. Just don't want public universities stealing my taxes for this corrupt stew of sports, snobbery and social engineering.

(And for them would "legacy" admission policies be very questionable grandfather clauses or illegal titles of nobility?)

I wonder if a partial solution to this should be an athletic affirmative action program benefiting those deemed African-American, Hispanic or Asian? And I wonder where and when anyone thinks all this race-scoring will end? The clock is ticking on Sandra Day O'Connor's 25 years!

Those Academic Rating 5 athletes must really be something.
Fight fiercely, Harvard!

The paper's principal assertion rests on an assumption that Harvard’s admissions model (and particularly the weight of the “tip” given for non-white applicants) would not change if the tips for the categories the authors do not like were eliminated. Since, as just demonstrated very comprehensively in litigation, the admissions model is in fact dynamic and holistic, that assumption is not true, and there is no basis for the authors’ numerical extrapolations.