Graduate school applications were up 2.2 percent year over year in 2018, and first-time enrollments increased 2.1 percent across institution types, according to a new report by the Council of Graduate Schools and the Educational Testing Service [Graduate Enrollment and Degrees: 2008 to 2018 (press release)]. 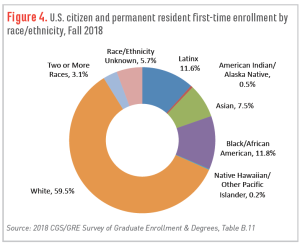 The groups were especially pleased to see higher increases in first-time enrollments among people of color, including Latinx (6.8 percent), black (3.5 percent), Asian (6.2 percent) and Native American students (8.3 percent). Over all, 24.1 percent of all first-time enrollees who were U.S. citizens and permanent residents in fall 2018 were underrepresented minorities.

Hironao Okahana, associate vice president, research and policy analysis, at the council, attributed those gains to increased attention to diversity on many campuses. “Graduate schools are prioritizing recruitment of traditionally underrepresented students and are eager to diversify their programs,” he said Monday. And while the increases “are a good start,” he added, “we must work to further support [underrepresented] students in their path to graduate school and beyond.” ...

First-time enrollments among international graduate students continued to fall in 2018, by 1.3 percent. International enrollments have fallen each year for the last three years, after a period of significant growth.