At More Than One-Third Of The Largest Law Firms, Minority Partners Are Disproportionately Nonequity

Minority partners at more than three dozen Am Law 100 firms disproportionately occupy the nonequity tier, according to an analysis by The American Lawyer.

Firms that show a sizeable disparity between the percentage of minority and white equity partners in their ranks say the gap is a byproduct of their recent efforts to build a diverse pipeline—that in time, many of those minority nonequity partners will gain equity status. But diversity advocates say the strikingly higher percentage of minorities in the nonequity tier casts doubt on the progress Big Law has made in bringing minority attorneys into firm leadership.

Using survey data submitted by firms, The American Lawyer analyzed the U.S. partnerships of 148 two-tiered law firms between fiscal years 2014 and 2018—131 of which are in the Am Law 200 and 66 occupying the Am Law 100—and found that minorities are joining the nonequity ranks at three times the rate of their white colleagues. 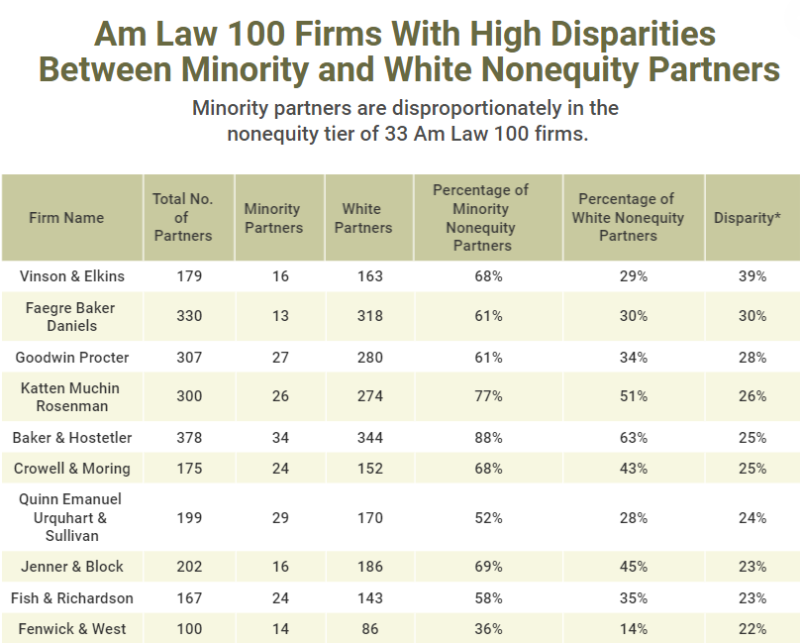