Anyone want to become a law professor? Anyone?

The largest annual entry-level law school hiring event kicks off Friday in Washington, but the scene at the host hotel will likely be more subdued than the frenzied atmosphere from a decade earlier. The number of candidates vying to become doctrinal legal academics is about half what it was 10 years ago, a phenomenon observers attribute to an overall drop-off in law school hiring as well as an increase in the credentials schools seek in new professors.

At the same time, more law schools are hiring new faculty this year, according to the Association of American Law Schools, meaning it’s something of a buyer’s market for would-be profs. In fact, 111 law schools have advertised open positions this cycle, the highest number in at least four years. Last year, 90 schools posted available jobs in advance of the hiring conference. ...

Just 334 people submitted FAR forms in the first distribution this year, down from 662 in 2010, according to data compiled by Sarah Lawsky, a professor at Northwestern University Pritzker School of Law who tracks the law school hiring market at PrawfsBlawg. 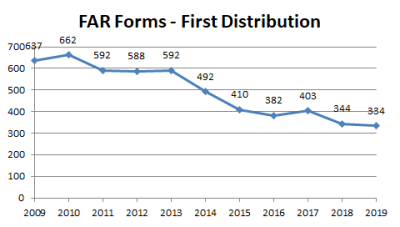 Despite the decline in available tenure-track positions in recent years, the corresponding falloff in job candidates means that the odds of landing a professor gig are roughly in line with what they were before the enrollment crisis.