WSJ: Inequality Is Holding Back The U.S. Economy

Wall Street Journal, Inequality Is Holding Back the U.S. Economy:

When it comes to money, America has always had winners and losers, but the widening gulf between the rich and the bulk of U.S. households may be making almost everybody worse off. That includes investors.

Income data released by the Census Bureau on Tuesday showed that the median U.S. household—the one in the statistical middle—had income of $63,200 last year. That was a bit more than the $62,600, adjusted for inflation, that the median household made in 2017. And it is well above the $56,750 that new data, adjusted for methodology changes, show the median household made in 2014, when many Americans were still smarting from the aftermath of the financial crisis.

But the 2018 figure was basically even with what the adjusted data show for 1999. 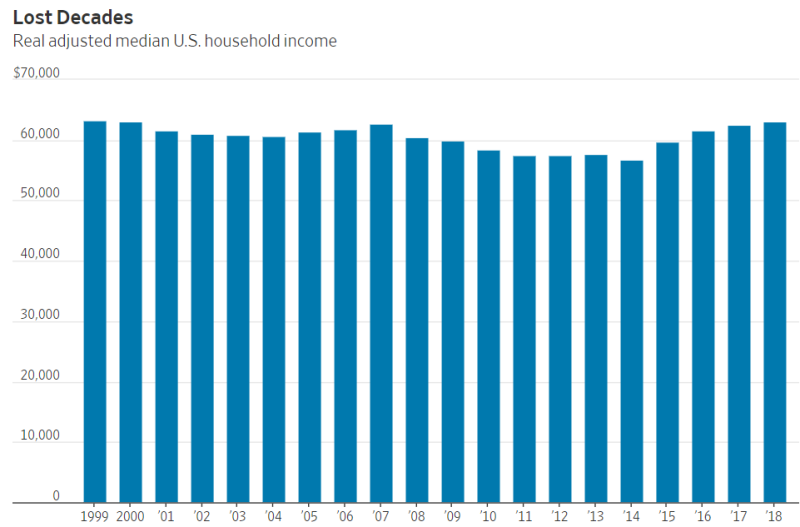 Considering that the U.S. economy grew by an inflation-adjusted 48% over the same period, that is more than striking. It reflects shifts in the economy by which upper-income tiers are capturing more of the economy’s gains. The top 20% accounted for 52% of household income last year, compared with 49.4% in 1999. A similar dynamic is going on with wealth; Federal Reserve data show a growing share of U.S. net worth accruing to the rich.

There is a heated debate over where income and wealth inequality stem from, with factors including globalization, the collapse of unions, changes in tax policy and rising demand for high-skilled over lower-skilled workers all seen as potential drivers. But the effects of inequality are just as important.

Income inequality is for the most part self inflicted. Always the fault of something else.

WSJ don't look in the mirror. "The widening gulf between the rich and the bulk of U.S. households," is due to the Federal Reserve pumping trillions into the stock market over the last ten years, which have be used to buy back trillions of stock. For example, the greatest inequities are in Silicon Valley and NYC. I wonder why? If you really want to narrow this gap, turn off the Fed faucet and watch the stock market wipe out all this inequity.

"Income inequality is for the most part self inflicted."