University of Alabama, Hugh Culverhouse End Spat After Return Of $21.5 Million Gift And Removal Of Donor's Name From Law School

Following up on my previous posts (links below):  Joint Statement by Eliza and Hugh Culverhouse, Jr. and the Board of Trustees of The University of Alabama: 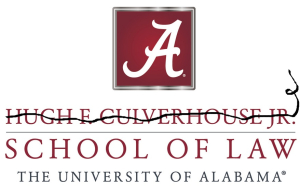 Months after the public fallout between the University of Alabama and its largest donor of the past decade saw the return of more than $21 million in gifts, the system released a joint statement with Hugh Culverhouse Jr. framing the spat as the result of divergent views about the future of the law school.

In June, the system’s board of trustees voted to return the $21.5 million given by Culverhouse toward a $26.5 million pledge to the university law school and remove his name from the law school, which was renamed after the Florida attorney and businessman in 2018. Culverhouse Jr. and his wife, Eliza, donated nearly $40 million to the university during the last decade.

I hope the school got to keep a part of the gift to compensate for the time, money, effort, discomfort, and embarrassment that the "benefactor" bestowed upon it.

Congrats to Culverhouse on getting almost a year of free naming rights.

There's a great book in there somewhere