New Harvard Study: 'The Dangers of Fluent Lectures' — How Smooth-Talking Professors Lull Students Into Thinking They've Learned More Than They Actually Have

Inside Higher Ed, 'The Dangers of Fluent Lectures': How Smooth-Talking Professors Lull Students Into Thinking They've Learned More Than They Actually Have:

Students who engage in active learning learn more — but feel like they learn less — than peers in more lecture-oriented classrooms. That's in part because active learning is harder than more passive learning, according to a new study in Proceedings of the National Academy of Sciences (Measuring Actual Learning Versus Feeling of Learning in Response to Being Actively Engaged in the Classroom). Based on their findings, the researchers encourage faculty members to intervene and correct what they call students' "misperception" about how they learn. ...

The study, involving Harvard University undergraduates in large, introductory physics classes, compared students' self reports about what they'd learned with what they'd actually learned, as determined by a multiple choice tests. Students were taught using exactly the same course materials -- a key control that many other studies comparing active versus passive learning have failed to establish. But one group learned via active instruction methods for a week at the end of the semester and the other learned via lectures from experienced and well-regarded instructors. ...

At the end of the course, students were given both "feeling of learning" and "tests of learning" assessments (the latter consisted of two, low-stakes quizzes with 12 multiple choice questions each). All of the "feeling" responses showed a consistent student preference for the passive lecture environment while scores on the learning tests -- on statics and fluids -- were significantly higher in the active classroom. 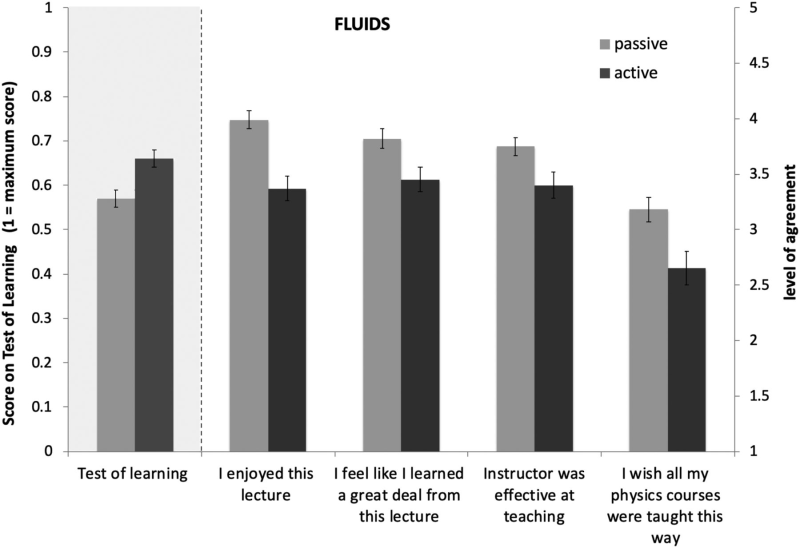 The findings suggest that "attempts to evaluate instruction based on students' perceptions of learning could inadvertently promote inferior (passive) pedagogical methods," the study says. A "superstar" lecturer could make some students feel good about learning at the expense of demonstrably more effective active experiences. But most importantly, the study says, "these results suggest that when students experience the increased cognitive effort associated with active learning, they initially take that effort to signify poorer learning." And that may have a negative effect on their "motivation, engagement, and ability to self-regulate their own learning."

Great practical study. And kudos to the authors for sharing the whole thing! https://www.pnas.org/content/116/39/19251 Even better (I think) when a professor provides detailed notes so I needn't worry about transcribing what all to cram for the test, but can focus on thinking about the parts of the material that are most difficult for me. That would seem to make the most of both the soothing / flattering passive lecturing style and the challenging / occasionally frustrating active style.