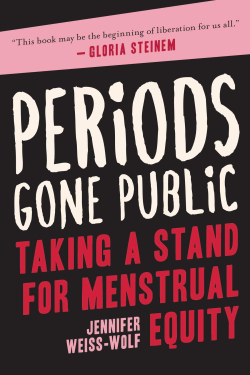 On any given day there are eight hundred million people on the planet who are menstruating, of whom at least five hundred million lack adequate resources—basic supplies, facilities, information, support—for managing their periods. ... a new social and policy movement has coalesced in the United States, centered on the concept of “menstrual equity”—a phrase first introduced in 2015 and further developed in the 2017 book Periods Gone Public: Taking a Stand for Menstrual Equity, which makes the case for an agenda that advances systemic solutions to address the societal and financial inequities caused by menstruation.10 The menstrual equity frame is distinct in its direct association of periods with the values of democratic participation, citizen engagement, gender parity, and economic opportunity.

This Article will explore the political and legal tenets of menstrual equity. It will explain why this frame has proven particularly potent and detail recent, successful policy advocacy in which momentum has been both unusually bipartisan and swift.

It will also shed light on the power of leveraging multiple tools for achieving societal change— law and litigation, coupled with extensive use of traditional and social media. It will preview emerging policy proposals for this burgeoning movement. In sum, it will show why making the case for menstrual

I can hardly wait until allergy sufferers start advocating for sinus equity.

Their letter to DeVos, signed by the presidents of the two major teacher unions among many others, argues that 1 in 5 girls in the United States have left school early or stayed home because they did not have period products.

It calls upon DeVos to remove what it terms "discriminatory barriers that hold students back," and that lack of access to these products "affects a student’s freedom to study, be healthy, and participate in society with dignity.”

Newsweek reports that "Menstrual Equity Is The New Thing," and that the related "fight to end period shaming has gone mainstream."

But to achieve true period parity, the movement should begin using legal action, just like the Potty Parity movement has been successful in attacking the practice of forcing females to wait on much longer lines than males to use restrooms in public places.

For example, a legal complaint helped force the U.S. House of Representatives to construct the first female restroom adjacent to the House floor so that female members are no longer "forced to urinate in a coffee cup" (as one report put it).

Another potty parity legal complaint prompted the University of Michigan to provide additional restroom facilities for females when it renovated its Hill Auditorium.

But this new movement is apparently relying primarily upon trying to change the attitudes of the public and legislators - often a slow and inefficient way to achieve progress.

But - unlike the potty parity, women's rights, nonsmoker's rights, LGBT's rights, and other similar movements - it apparently has yet to take advantage of the tremendous but largely untapped power of legal action to both force change and to educate the public.

For example, failing to provide tampons in female rest rooms, while providing soap, paper towels, and toilet paper in rest rooms generally, could fall within a new class of court decisions.

Both decisions, by different U.S. Courts of Appeals, held that providing exactly the same restroom facilities for men and women can still constitute illegal sex discrimination - under disparate impact and/or sexual harassment and/or hostile work environment legal theories - if what is provided does not meet the special and additional needs of females, based upon what one court said are the "anatomical differences between men and women which are 'immutable characteristics,' just as race, color and national origin are."