Reviews Of Basic Income: A Radical Proposal For A Free Society And A Sane Economy 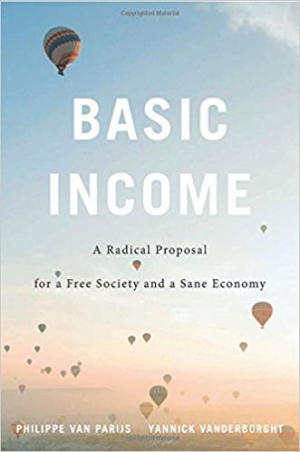 Juliana Bidadanure (Stanford), Income for All: The Idea of Universal Basic Income Is More Practical Than It Might Sound:

In times of economic austerity—when the welfare state is shrinking as an ideal and an institution; access to childcare, healthcare and education are increasingly contested as rights of all; and the paradigm of individual responsibility rules—it is easy for progressives to give up on big ideals. If we can’t even protect Planned Parenthood or affordable healthcare, pushing for anything more visionary seems based on mere wishful thinking. But for these same reasons, it may be more urgent than ever for progressives to propose radical utopias with the potential to federate otherwise divided societies. That’s the view that Philippe Van Parijs and Yannick Vanderborght take in their fantastically comprehensive book, Basic Income.

“Basic Income,” by Belgian academics Philippe Van Parijs and Yannick Vanderborght, represents an attempt to lay out a systematic case for what would be a radical departure in public policy. This book, it must be said up front, it not an easy read. Messrs. Van Parijs and Vanderborght are ethicists, and their closely argued text has all the liveliness of a philosophical treatise. But “Basic Income” provides a rigorous analysis of the many arguments for and against a universal basic income, offering a road map for future researchers who wish to examine policy alternatives. ...

Van Parijs and Vanderborght make a strong case that any basic income should be universal, because grants aimed at the poor or the jobless “have an intrinsic tendency to turn their beneficiaries into a class of permanent welfare claimants.” Distributed with no strings attached, they assert, a basic income would eliminate disincentives to work and provide a more secure financial basis for those who wish to start their own businesses. They suggest one-fourth of the average per-capita income—or $1,163 per month for each individual in the United States—as an amount that would provide basic economic security without breaking the bank.

To be sure, this implies a breathtaking amount of public expenditure, which is one reason a universal basic income is nowhere on the U.S. political agenda. But the authors’ call “to restructure radically the way in which economic security is pursued in our societies and in our world” is encountering growing sympathy from people with widely disparate political orientations but a shared concern about how technology might fundamentally change the nature of work.

Philippe Van Parijs and Yannick Vanderborght’s recent “Basic Income: A Radical Proposal for a Free Society and a Sane Economy” (Harvard), a meticulously comprehensive, frequently persuasive accounting of U.B.I.’s superiority by measures economic, philosophical, and pragmatic. ... [T]hey see basic income as a sound social program and a corrective “hope”: not a perfect system, but better than anything else.

These kinds of academic papers always make me doubt the sanity, as defined by the tenacity of one's grip with reality, of the authors. How one can talk about redistribution of wealth in order to guarantee someone a basic income and a "free society" in the same sentence baffles me. It's like the old bumpersticker: "Gas, grass or ass. Nobody rides for free."