New York Times, How a Trump Tax Break to Help Poor Communities Became a Windfall for the Rich:

President Trump has portrayed America’s cities as wastelands, ravaged by crime and homelessness, infested by rats.

But the Trump administration’s signature plan to lift them — a multibillion-dollar tax break that is supposed to help low-income areas — has fueled a wave of developments financed by and built for the wealthiest Americans. 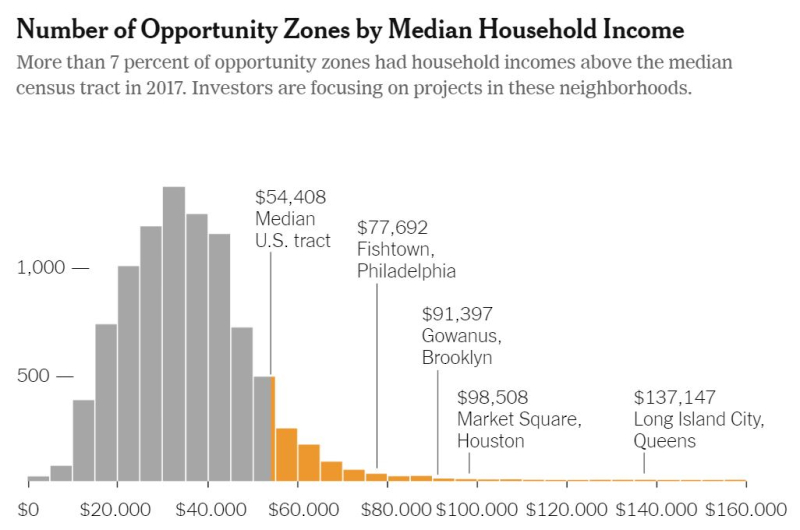 Among the early beneficiaries of the tax incentive are billionaire financiers like Leon Cooperman and business magnates like Sidney Kohl — and Mr. Trump’s family members and advisers.

Former Gov. Chris Christie of New Jersey; Richard LeFrak, a New York real estate titan who is close to the president; Anthony Scaramucci, a former White House aide who recently had a falling out with Mr. Trump; and the family of Jared Kushner, Mr. Trump’s son-in-law and senior adviser, all are looking to profit from what is shaping up to be a once-in-a-generation bonanza for elite investors.

The stated goal of the tax benefit — tucked into the Republicans’ 2017 tax-cut legislation — was to coax investors to pump cash into poor neighborhoods, known as opportunity zones, leading to new housing, businesses and jobs.

The initiative allows people to sell stocks or other investments and delay capital gains taxes for years — as long as they plow the proceeds into projects in federally certified opportunity zones. Any profits from those projects can avoid federal taxes altogether.

Instead, billions of untaxed investment profits are beginning to pour into high-end apartment buildings and hotels, storage facilities that employ only a handful of workers, and student housing in bustling college towns, among other projects. ...

The tax break is largely benefiting the real estate industry — where Mr. Trump made his fortune and still has extensive business interests — and it is luring people with personal or professional connections to the president. ...

Backers of the opportunity-zone program say luxury projects are the easiest to finance, which is why those have been happening first. Over the long run, they say, those deals will be eclipsed by ones that produce social benefits in low-income areas.

A few days ago The Times reported on widespread abuse of a provision in the 2017 Trump tax cut that was supposed to help struggling urban workers. The provision created a tax break for investment in so-called “opportunity zones,” which would supposedly help create jobs in low-income areas. In reality the tax break has been used to support high-end hotels and apartment buildings, warehouses that employ hardly any people and so on. And it has made a handful of wealthy, well-connected investors — including the family of Jared Kushner, Donald Trump’s son-in-law — even wealthier.

It’s quite a story. But it should be seen in a broader context, as a symptom of the Republican Party’s unwillingness to perform the basic functions of government. ... [T]he opportunity-zone affair reflects the reality that Republicans are no longer willing to spend public money in the public interest. ...

[The Republican approach] has all been about policy by tax break — which consistently fails, for at least three reasons.

First, such policies rarely “trickle down” to the people they’re supposedly intended to benefit. ...

Second, the main beneficiaries of targeted tax cuts tend, consistently, to be a small group of wealthy individuals. ...

The point, again, is that you shouldn’t think of the opportunity-zone fiasco as an isolated mistake. Things like this are inevitable when one of our two major political parties has basically turned its back on the very idea of productive public spending.

Who else would one expect to have the liquidity and capital available to make such a long term investment in such risky neighborhoods? Duh.