GWU Seems To Be Moving Away From Controversial Colonial: 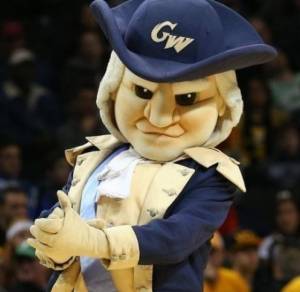 The term “Colonial” used to grace (or disgrace, depending on where you fall) mugs, expensive T-shirts and community spaces across George Washington University’s downtown D.C. campus.

However, that tradition seems to be changing.

Student groups have been advocating for the transition for some time now. On one side of the argument, GWU fans and alumni say that the term is traditional and respectful of the university’s origins. (GWU was founded through congressional charter, and the term “Colonial” was used as homage to American colonists.)

Those that want to leave the outdated term behind say that it is representative of ethnic violence, genocide and racism.

This past April, students passed a referendum requesting the university to change the widely used nickname. The initiative was approved by 54 percent of student voters, or 2,700 participants, while 2,100 students voted against the change, bringing the total number of participants to less than half the student body. ...

Proposed alternatives include the “Revolutionaries,” “Hippos” and the “Riverhorses,” the latter two after a famous statue of a hippopotamus on campus often cited as an unofficial mascot. ...

Prior to the April vote, Young America’s Foundation and GW College Republicans posted to their respective Facebook pages urging students to vote no, citing the unity and history behind the Colonial nickname.

In response to questions, the director of public relations for GWU’s College Republicans said that the group stands by its Facebook post, which read, “The Colonial mascot embodies the spirit of freedom and ingenuity that marked the founding of the United States of America.” It continued, “Changing the mascot allows historical revisionism to undermine the values on which our university was founded and disparages the legacy of our founding fathers. Rebranding our university mascot does nothing to fix injustices of the past.”

Paul continues to be taken in by parodies from "The Onion" and "The Babylon Bee." Surely, such sensitivity nonsense can't be real.

I hope everyone realizes that this applesauce is instructive on a going-forward basis.

Good luck convincing people to right things in the future. I for one am not interested in being castigated in perpetuity after any further social changes. Therefore, I will oppose all social changes going forward.

By the way, everyone should be thankful that Asians have not decided to go anti-American on us. If they ever do, let's bring on the next civil war and get this over with.

The evil shadow of presentism rears its ugly head among the historically illiterate once again.

As American society devolves into self-parody, outlets like the Onion and Babylon Bee are becoming increasingly irrelevant. Well maybe not quite yet: https://babylonbee.com/news/homeless-man-rejects-charity-after-searching-through-givers-tweet-history