Twenty-three years after it was founded, Florida Coastal School of Law is seeking to change its corporate tax status from for-profit to not-for-profit.

The school has filed with the American Bar Association an Application for Acquiescence in a Substantive Change in Program or Structure.

The application was denied at its first review in August, but the school, with the ABA’s approval, is submitting additional information for reconsideration, said Florida Coastal President Peter Goplerud.

The intent is to change the perception of the school’s corporate structure. “Rightly or wrongly, there is a cloud over for-profit education. We think that some of our competitors use our tax status against us in student recruitment,” Goplerud said. “The time is right to send a positive message to our prospective students and to our alumni and move forward in a way that will provide even more opportunity for success,” he said.

The proposed change in tax status would not change the school’s business model, however. “As a matter of good business, every law school in the country has to make a profit or they can’t survive. I was dean of three other law schools before I came to Florida Coastal. At each university, the law school was essentially required to make a surplus to turn over to the university,” he said. ...

In October, the ABA notified the school it was “significantly out of compliance” with accreditation standards. That led to increasing the minimum academic standards for admission to Florida Coastal and an overhaul of the curriculum, including adding Bar exam preparation courses to the requirement for graduation.

Bar passage rates improved and in May, the ABA lifted its sanctions and declared that “Florida Coastal School of Law remains an approved law school.” In the most recent Bar exam in July, 71% of Florida Coastal graduates — 22 of 31 — passed the exam, compared to the state average of 73.9%. ... 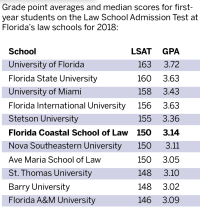 The school’s enrollment for the current semester is 184 students. The cost of resident tuition and living expenses at Florida Coastal is $46,156 per semester compared to $29,462 per semester at the University of Florida Levin College of Law.

“The mission of Florida Coastal will remain to serve the underserved. The two major state university law schools are exclusive in terms of who they take. That leaves a significant number of people who can succeed in law school who can’t get into (the University of Florida or Florida State (University). That’s the segment of the prospective student market that we focus on,” Goplerud said. The ABA is scheduled to review Florida Coastal’s application for status change again in November.