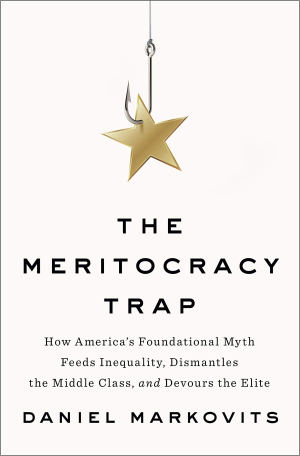 There are at least two kinds of meritocracy in America right now. Exclusive meritocracy exists at the super-elite universities and at the industries that draw the bulk of their employees from them — Wall Street, Big Law, medicine and tech. And then there is the more open meritocracy that exists almost everywhere else.

In the exclusive meritocracy, prestige is defined by how many people you can reject. The elite universities reject 85 to 95 percent of their applicants. Those accepted spend much of their lives living in neighborhoods and attending conferences where it is phenomenally expensive or hard to get in. Whether it’s the resort town you vacation in or the private school you send your kids to, exclusivity is the pervasive ethos. The more the exclusivity, the thicker will be the coating of P.C. progressivism to show that we’re all good people.

People in this caste work phenomenally hard to build their wealth. As Daniel Markovits notes in his powerful new book, The Meritocracy Trap: How America's Foundational Myth Feeds Inequality, Dismantles the Middle Class, and Devours the Elite, between 1979 and 2006, the percentage of workers in the top quintile of earners who work more than 50 hours a week nearly doubled. ...

You don’t have to travel far to get outside the exclusive meritocracy. For example, last spring I spent a few days at Arizona State University, which is led by Michael Crow. A.S.U. defines itself not by how many people it can exclude but by how many it can include. The need for higher education is greater than ever, so A.S.U. has rapidly expanded to meet that need. Between 2013 and 2018, undergraduate enrollment rose by 45 percent. ... The atmosphere is much more democratic and accessible to all. Faculty members are treated less as scholars within rarefied disciplines and more as interdisciplinary intellectual entrepreneurs. ...

People in both the exclusive and open meritocracies focus intensely on increasing skills. But it’s jarring to move from one culture to the other because the values are so different. The exclusive meritocracy is spinning out of control. If the country doesn’t radically expand its institutions and open access to its bounty, the U.S. will continue to rip apart.

Other commenters beat me to it, but, yeah, I'm having trouble understanding how the elite version is "meritocracy." I guess I have to read the book to understand how the elite are being "devour[ed]." Or maybe not. Too busy working >50 hours a week.

I just checked. Harvard has over $38B in its endowment. Yale has over $29B. How do you think they got all that money?

Except that it's not a meritocracy (see NYT story on college admissions, etc.)

" And then there is the more open meritocracy that exists almost everywhere else."

Yeah, a recent study found that the average online job application has a 0.4% percent of winding up with a job offer - 10x to 20x lower odds than Ivy League admissions - but sure, the *other* meritocracy is more open.