Since the early 2000s, law departments and law firms have advanced ambitious public initiatives to diversify the legal profession. In law firm power centers, however, the disconnect between public proclamations and empirical reality is staggering. ...

We can examine how demographic groups are distributed across law schools broadly by looking at four groups: law schools ranked 1 to 14 by U.S. News = “T-14”, those ranked 15 to 50 = “Tier 1,” 51 to 100 = “Tier 2,” and 101 and lower/not ranked = “Tier 3/4”. Figure 2 reports the percentage shares for each group graduating from each tier category. The distributions reveal a stark demographic asymmetry. 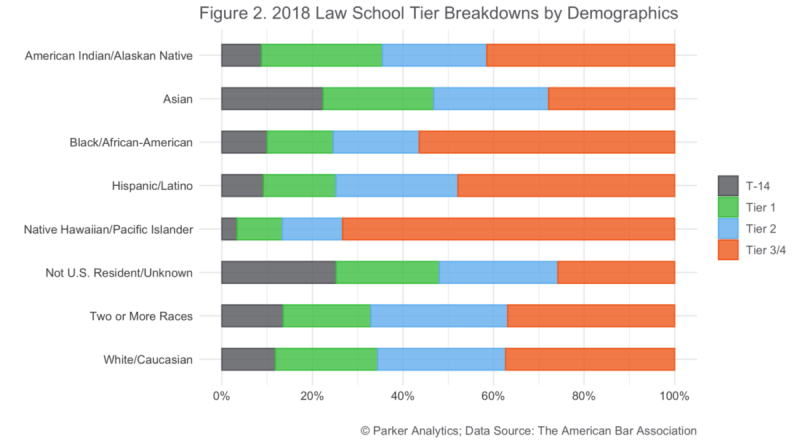 Everyday, when I am paying attention, the world is nudging me to let go of something wrong and unhelpful. A friend of mine calls it “dropping the rock.” The rock is an assumption about how the world operates that can’t be reconciled with an honest evaluation of facts and experience.

Dropping the rock is primarily a personal philosophy. But as my friend points out, “It also has professional benefits.”

One of those benefits is the ability to see and savor developments that are fundamentally good and hopeful in all aspects of life. Indeed, that is the purpose of this post: to sketch out three brief examples of the legal profession entering a period of learning and regeneration.

Does a Blog Have a Publication Schedule?:

Several times this summer, colleagues have referred to Legal Evolution as a blog. A couple times I’ve corrected them and said that Legal Evolution is a publication. After all, we have a publication schedule, subject matter focus, and contributor guidelines that are targeted and specific. See Post 092 (publishing contributor guidelines). But I’m done correcting my colleagues, as a friendly conversation is not the right time or place. Instead I’ll write it here and let the passage of time work its magic.

To the extent this sows confusion, we can blame Kevin O’Keefe, the founder and CEO of LexBlog.  In the spring of 2016, Kevin visited Indiana Law to share his career journey with my students.  Over dinner that night, Kevin discussed the monthly traffic of Law.com vs. the ABA Journal vs. Above the Law.  The latter began its life as a blog, yet it was proving to be a profoundly disruptive force in legal publishing. Why? It was on the winning side of a massive demographic shift in readers and reading habits. Further, it was still gathering steam.