Survey: Nearly Half Of All Students Are Distracted By Technology

Inside Higher Ed, Survey: Nearly Half of Students Distracted by Technology:

A recent survey found the use of technology in class, such as laptops or phones, for noneducational purposes was distracting to almost half of students, while others surveyed believe technology in the classroom is unavoidable.

The study was published in the Canadian Journal for the Scholarship of Teaching and Learning and surveyed 478 students and 36 instructors at the University of Waterloo [A Mixed Blessing? Students’ and Instructors’ Perspectives about Off-Task Technology Use in the Academic Classroom].

Of the undergraduate students surveyed, 49 percent said the use of technology for reasons not related to class, or “off-task” use, was distracting to them. However, students generally said they’ve used technology for off-task purposes regardless.

“Students actually know and realize that the use of technology has a negative impact on people around them when used for off-task purposes like browsing the web,” Elena Neiterman, a Waterloo teaching fellow and one of the authors of the study, said. “They still feel like [technology] is still necessary when the classes are not engaging enough. Like, for example, being in a large lecture hall or when the professor is what they call ‘boring.’”

The survey showed the use of social media in a classroom setting had become normalized, and students saw off-task activity less negatively because most students were engaged in some sort of off-task activity at some point during class. Neiterman said the survey revealed some students felt that to allow for a brief distraction when they felt bored would help them feel more engaged for the rest of the class period. Most students surveyed said they saw it as their right to use the technology in class. ,,,

In particular, the study focused on the perspectives on instructors regarding technology use. While teachers and students were found to have similarly positive views on the use of technology for class-related activities, teachers obviously held negative views about off-task activities. Sixty-eight percent of instructors said they felt bothered by student cellphone use, however, only 32 percent were bothered by laptop use. 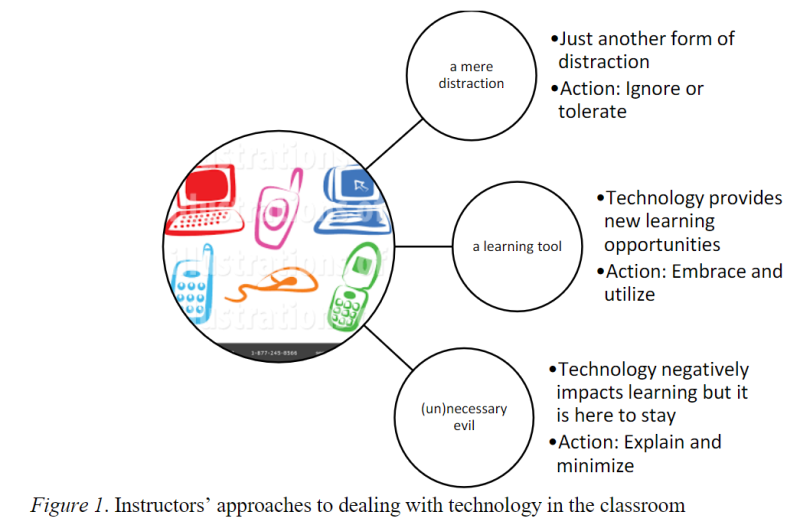 In my day, I was bored. Maybe distracted is better?

If the student is bored, he probably isn't learning anything anyway and he might as well be using his time productively, for profit or recreation. Students who want to learn make good use of their computers, and they're the ones to care about.