More On A Dean's Perspective On Diversity, Socioeconomics, The LSAT, And The U.S. News Law School Rankings

My talk last week at SEALS on A Dean's Perspective On Diversity, Socioeconomics, The LSAT, And The U.S. News Law School Rankings focused on the tension faced by deans and faculty as they try to increase the diversity of their student bodies in the light of the great weight U.S. News places on median LSATs and UGPAs in its law school rankings methodology — 22.5% of the total ranking. Several folks asked for copies of this chart of the racial and ethnic composition of the 2017-2018 law school applicant pool from LSAC data: 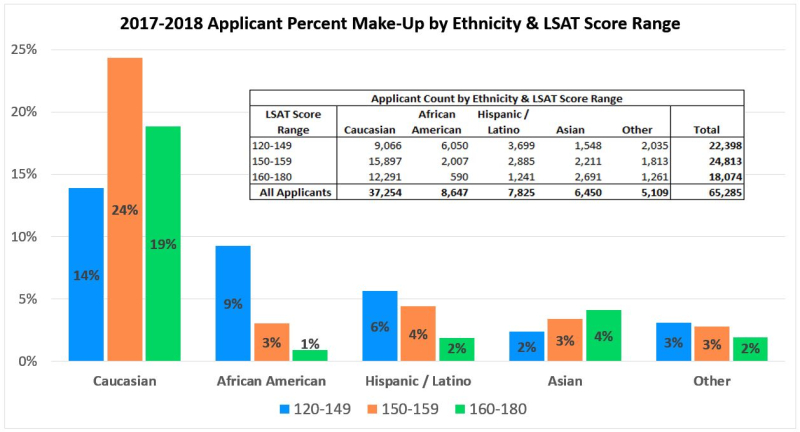 In my talk, I noted how over-reliance on LSAT medians in admissions and financial aid decisions is contrary to the test's 2.6-point margin of error, magnified by the rankings' use of the highest score for applicants who take the LSAT more than once rather than the statistically more reliable average of all of the applicants' score. I suggested several ways U.S. News could mitigate the adverse effects on law school diversity efforts, including using a combined index score rather than separate medians and/or adding 75th and 25th percentiles as well.