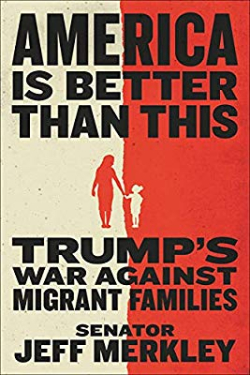 Meet
SENATOR JEFF MERKLEY
In conversation with WENDI ADELSON
discussing
America is Better Than This:
Trump’s War Against Migrant Families

Please join us as we welcome Senator Jeff Merkley, a leading advocate for reform of the brutal policies that have created a humanitarian crisis on the Southern U.S. border. America is Better Than This (Twelve, $27) is his exposé and cry of outrage at the cruelty and chaos the Trump administration has wrought.

Jeff Merkley is a senator from Oregon, serving in the U.S. Senate since 2009. Merkley has been noted for his opposition to the Trump administration’s immigration policies. Most famously, in June 2018 Sen. Merkley attempted to enter the Casa Padre processing facility in Brownsville, Texas, where children separated from their parents were being detained as a result of the Trump administration’s “zero tolerance” policy. Merkley was not permitted to enter the facility, and eventually the police were called and he was asked to leave the premises. Video of the event went viral on social media, drawing greater attention to the policy in traditional media and among the public.

Wendi Adelson has spent the past two decades giving voice and agency to immigrants, DREAMers, and victims of human trafficking. Wendi is currently a practicing immigration lawyer and founder of the Immigrant Child Defense Corps, an effort to create a guardian ad litem type program to represent vulnerable children in Miami’s Immigration Court system. She was most recently the Executive Director of the Immigration Partnership & Coalition Fund, founded by Mike Fernandez, to bring together business and civic leaders in Florida to fight for sensible changes to immigration policy.

Let's reach out to them and say this: please reconsider appearing with (or featuring) Wendi Adelson — someone who separates families in her own life — at an event about opposing migrant family separation.

No, they're illegal aliens.

"We are better than this" signals a weak position. It is said by those who cannot defend their nonsense. What is the response, to say that, no, we are not better than this?

Empathy is always easier at a distance