Has College Gotten Too Easy?

The Atlantic, Has College Gotten Too Easy?:

When Jeff Denning, an economist at Brigham Young University, started looking closely at the data on college-completion rates, he was a bit perplexed by what, exactly, was driving this uptick. He and some of his BYU colleagues noticed that a range of indicators from those two decades pointed in the direction of lower, not higher, graduation rates: More historically underrepresented groups of students (who tend to have lower graduation rates) were enrolling, students appeared to be studying less and spending more time working outside of school, and student-to-faculty ratios weren’t decreasing. “We started thinking, What could possibly explain this increase?” Denning told me. “Because we were stuck with not being able to explain anything.”

Stuck, that is, until they started looking at what was happening with students’ GPAs. Despite the aforementioned trends among the college-going population, students were, on average, earning higher grades in their first year of college. “[GPAs are] going up, and as best we can tell, there’s not a good reason that they’re going up, in terms of student behavior or preparation or anything like that,” Denning said.

If grades are improving but there’s no reason to think that students have become better students, an interesting possibility is raised: The unassuming, academic way Denning puts it in a recent paper (co-authored with his BYU colleague Eric Eide and Merrill Warnick, an incoming Stanford doctoral student) is that “standards for degree receipt” may have changed. A less measured way of saying what that implies: College may have gotten easier. 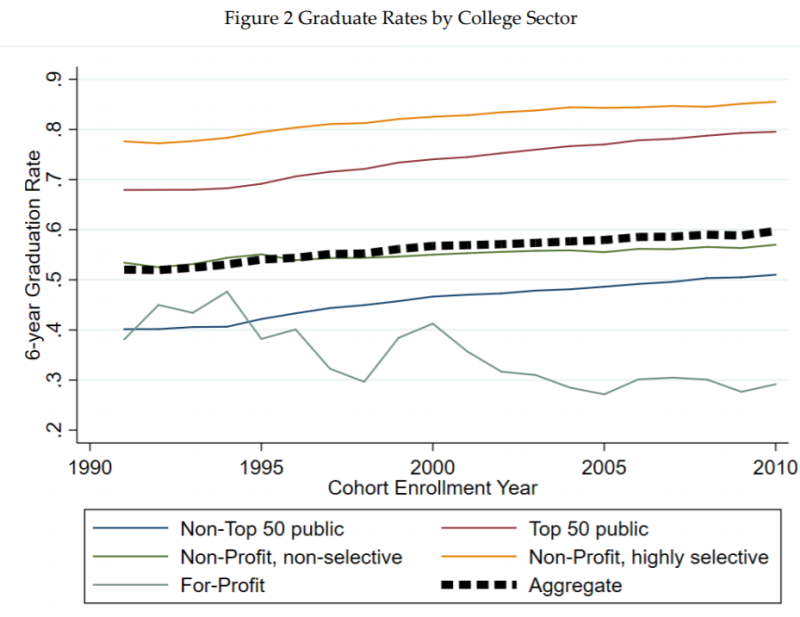 As the cost of college has greatly outstripped inflation, graduation rates can also be tied to a lack of money, but overall, college is too easy. Diploma's in some majors are mere "participation trophies".

The schools have also been adding a number of majors that should be seen as "less than rigorous". These should include things like "Leisure Studies" (I couldn't believe it when I first read it on a college football team's info sheet), basically anything with "Studies" in the name, etc. Keep them in, get the loan money, and who cares if they can get a job.

Hell yeah it has.

It's a piece of cake.

Why do you think SAT scores are sorta kinda optional at many schools these days?

They need to churn out those activists come hell or high water.

Also, it wouldn't look so good if most of your diversity students were expelled for failing to meet academic standards, right?