60% Of Law Firms, Companies Plan To Increase Legal Hiring Over Next Six Months, Especially In Litigation

The legal field is expected to see an increase in hiring in the months ahead, with litigation driving the greatest job growth. According to Robert Half Legal's State of Legal Hiring research, nearly 6 in 10 U.S.-based lawyers (59%) said their law firm or company plans to expand their legal teams in the second half of 2019, up 12 percentage points from the last time the survey was conducted. More than one-third of lawyers (36%) anticipate staffing only vacated positions, while 2% said they would neither staff vacated positions nor create new ones. Only 1% expect staffing reductions.

More than one-quarter of lawyers (27%) predict litigation will generate the most employment opportunities during the next six months, followed by general business/commercial law, which received 21% of the response, and privacy, data security and information law (15%). 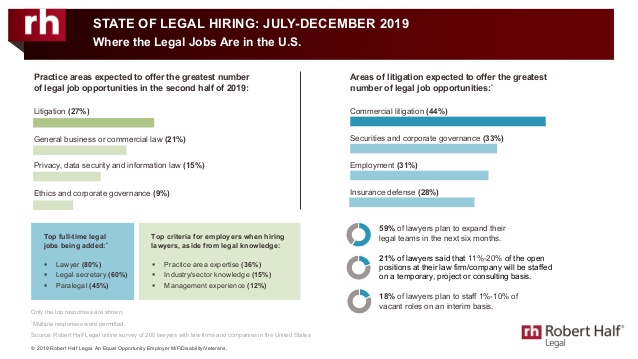 The top full-time positions being added by law firms/companies in the second half of 2019 are lawyers (80%), legal secretaries (60%) and paralegals (45%).

Sure. Let's look beyond the fact that this is obviously a self-serving marketing gambit by Robert Half and take a look at the full *study.* Say, what's this?

Boy, that sure doesn't sound like a ringing endorsement for ENTRY-LEVEL attorney hiring, now does it?

You might be interested in this research from NALP that was just published. Their study indicates that employment for law grads from the class of 2018 is reaching prerecession levels: https://www.nalp.org/uploads/SelectedFindingsClassof2018_FINAL.pdf