Wall Street Journal, Being a Law Firm Partner Was Once a Job for Life. That Culture Is All but Dead.: 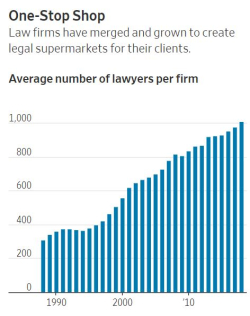 Being named a partner once meant joining a band of lawyers who jointly tended to longtime clients and took home comfortable, and roughly equal, paychecks. Job security was virtually guaranteed and partners rarely jumped ship.

That model, and the culture that grew up around it, is all but dead. Law firms are now often partnerships in name only. Full-time chief executives, some without law degrees, have replaced the senior partner running human resources and accounting. Law firm names have trended toward the shorter and snappier, more befitting a tote bag than a law library.

Many firms have expanded rapidly to mirror the growth of their corporate clients, with hundreds of partners spread around the world. The largest, Dentons, recently hit 10,000 lawyers in 78 countries, around a third of them partners. ...

In the new paradigm, lawyers are expendable, and partners may jump to a competitor for the right amount of money, taking as many clients as possible with them on the way out. 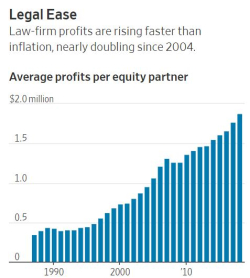 Junior lawyers always worked long hours for years before being promoted, but that meant a kind of lifetime tenure. Today, making partner can take more than a decade and still requires scraping for new business. Becoming a partner, the industry saying goes, is like winning a pie-eating contest only to find the prize is more pie.

“If you get partners in their private moments to talk about ambitions for their children, I would be very surprised if many would articulate partnership in a large law firm,” said Elliott Portnoy, Dentons’s global chief executive. ...

No firm embodies the changes more than Kirkland, which was founded in Chicago in 1909. ... Over the past decade, Kirkland has become known for making high-price offers to rising stars at competitors, for $10 million a year or more in some cases. It has embraced the two-tiered partner system, made up of a junior class paid a set salary and an inner circle of equity partners, who split the firm’s profits. 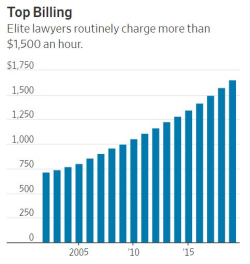 The system is meant to reward ambitious young lawyers faster, before they weary of the entry-level title of associate. Left unsaid: The promotion often justifies a bump in their hourly rate to around $1,000, which enriches senior partners who share in the firm’s profits.

The changes have pushed the spread between Kirkland’s highest- and lowest-paid partners to 43-to-1. Among its equity partners, the spread is nearing 9 to 1. Traditionally, the best-paid partner made no more than three or four times the most junior at the nation’s top law firms.

Leaders at rival firms say Kirkland’s pay has forced them to pay their own top performers more, at risk of blowing apart their culture.

Asterix: Are those slaves?
Ekonomikrisis: Oh no, they're partners... when we floated the company, I drew up the contract and they failed to read it carefully before signing. I'm chairman and managing director

And should clients have a right to expect the "partner" name and price to mean expertise worth about as much as one's peers, backed by a mutual long-term stake in the reputation of their work?

Been a lawyer for over 30 years but lucky enough not to have to go the law firm route; have spent my time as an appellate prosecutor. I got to spend time with my daughter, furthest I ever had to travel on business was within NY State for a DA Conference, and, with the invention of the PC, could easily work at home and not have to keep the late hours I used to have to keep before a filing date or a vacation.

Sure, the money is not as good, but my ability to lead a personal life has been reward enough. Besides, I have had the chance to argue in every appellate court in the state of NY, except the Appellate Division, Fourth Department. Never made it to the Supreme Court of the US, but I'm long over that.

Quote: The changes have pushed the spread between Kirkland’s highest- and lowest-paid partners to 43-to-1.

A 4300% difference between a lead lawyer and a grunt is dangerous. The one at the bottom has no incentive to make the one at the top succeed. He even has reasons to make the latter fail. And in a legal dispute that's easily done, simple fail to 'discover' a good argument for a client.