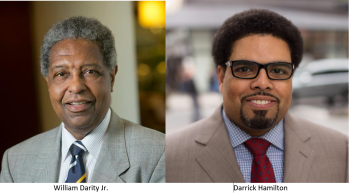 For decades, William Darity Jr. and Darrick Hamilton toiled in obscurity. They criticized mainstream economists and politicians for failing to address racial inequality, and touted more radical remedies of their own.

Now, with the 2020 presidential campaign under way and liberal Democrats ascendant the two economists are in the spotlight, thrust into the middle of an intraparty debate over how much to embrace big government and a race-oriented message.

Their signature ideas—guaranteed jobs for all adult Americans seeking them, government-backed trust funds for American babies and reparations for slave descendants—are being talked about on the campaign trail and, in the case of reparations, during a raucous congressional hearing in June.

The two African-American economists’ theories on “stratification economics,” which focuses on economic gaps between whites and blacks, have helped shape the rhetoric and platforms of several candidates. ...

They have teamed up to write more than 50 articles for academic and popular journals and books, and pioneered what they consider a new field of scholarship they branded stratification economics. They contend that mainstream economists tend to regard racial discrimination as a short-term market glitch that market forces will correct eventually. That logic, they say, leads to the conclusion that persistent African-American woes result mainly from their own failings, such as inadequate education or poor financial choices.

Policy makers, they contend, focus too much on employment, income and education and not enough on family wealth across generations. They say wealth is a better measure of household economic security—the ability to weather emergencies, pay for education, afford homes in good neighborhoods and take risks.

The racial wealth gap accumulated over years, they say, stoked not just by slavery but by 20th-century policies that helped whites and marginalized African-Americans. No matter how hard blacks work to improve their education or earn more, the two men say, they won’t catch up financially. Only significant government intervention can address the disparity, they argue.

They published frequently in “The Review of Black Political Economy” but rarely cracked the most widely cited journals.

As they gain political prominence, their work also is drawing more attention from mainstream economists.

Two regional Federal Reserve Banks have teamed up with Messrs. Darity and Hamilton to quantify wealth disparities in major U.S. cities. One widely cited conclusion: The median nonimmigrant black household in Boston had a net worth of $8 in 2014, versus $247,500 for the median white household.

One central-bank economist, William R. Emmons of the St. Louis Fed, says Mr. Hamilton persuaded him to alter his analysis of the roots of the racial wealth gap. They began speaking after Mr. Hamilton criticized his 2015 research focused on poor financial choices by blacks and Hispanics.

“Darrick changed my mind,” says Mr. Emmons, who later looked more at the effects of discrimination. ...

Protégé and mentor tangle repeatedly, publicly via Twitter , over the best approach for carrying out their stratification platform. Mr. Hamilton favors deepening ties with presidential campaigns and praising candidates who nod toward his general ideas. Mr. Darity frequently attacks those same candidates as insufficiently bold.

Mr. Hamilton emphasizes how baby bonds could close the wealth gap between most black and white households. Mr. Darity stresses it would do little to narrow the chasm between total black and total white wealth, saying only reparations can make a serious dent.

Mr. Darity says he is playing the long game. “The intensity of my commitment to reparations means that I won’t take an accommodating position,” he says, adding with a laugh: “I suspect I won’t get too many more calls” from politicians.

“We’re different in that way,” says Mr. Hamilton. “I don’t want to be the contrarian…I’m trying to win.”

No matter how hard blacks work to improve their education or earn more, the two men say, they won’t catch up financially.

Japanese-Americans were imprisoned for years and their property mostly confiscated. Will their descendants also never catch up for the same reasons? Or are other factors at work?

Something to be said for starter jobs but the Social Security "trust fund" we have is just a cruel fake piggy bank for deficits that really make our kids' government MORE broke!