The U.S. tax overhaul has lowered tax rates for many companies, and many others that were already toward the bottom of the scale have been able to stay there so far, a Wall Street Journal analysis shows.

The lower rates follow tax-law changes Congress passed at the end of 2017. Since then, the Journal analysis shows, the median effective global tax rate for S&P 500 companies declined to 19.8% in the first quarter of 2019 from 25.5% two years earlier. 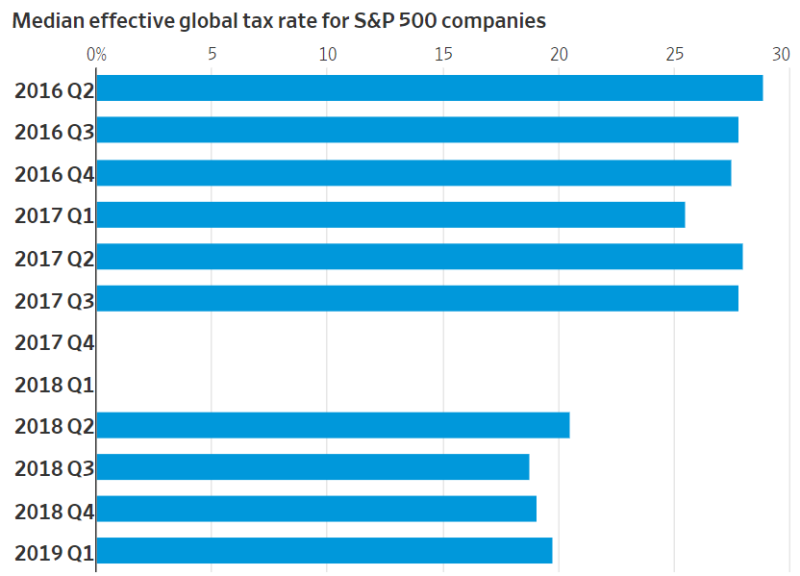 That marked the third straight quarter below 20% and is consistent with the goals and structure of the tax overhaul, which lowered the federal corporate rate to 21% from 35%. The law’s authors wanted to help U.S. multinationals compete in foreign markets and aid domestic companies with high tax burdens, while reducing the value of tax breaks and making it harder to achieve single-digit tax rates.

Much of the decline is coming because fewer firms are paying rates at the highest end, according to the Journal analysis. Just 28 companies, including mining giant Freeport-McMoRan and Chevron, reported a global tax rate above 32% in the first quarter, down from 143 before the overhaul. 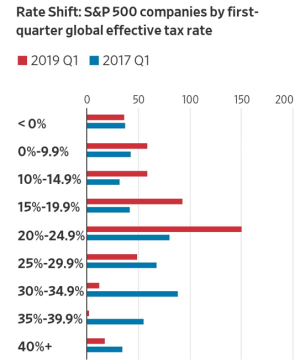 Wouldn't it be worth mentioning the goal of NOT having to spend an inordinate amount of time and energy to attempt to lower the effective corp tax rate for your company? To enter into certain deals/transactions primarily due to the tax impacts of the deal?