The Trump Economy Is Leaving Many Americans Behind

New York Times op-ed:  The Trump Economy Is Leaving Many Americans Behind, by Steven Rattner:

2020 presidential candidates should highlight the economic shortcomings that still exist to counter the president’s sunny narrative.

A major new poll released Sunday showed that Donald Trump’s approval rating is on the rise, particularly for his handling of the economy. How can Democrats make their case for why the economy may not be as good as it can appear? Here are three examples of groups of Americans who are being left behind.

It may be common knowledge that African-Americans are not as well-off financially as white Americans, but what is not widely understood is the extent to which black Americans have fallen further behind over the past nearly two decades. In 2002, African-Americans, on average, earned just over 80 percent of what white Americans earned. By the first quarter of this year, after various ups and downs, that figure had fallen to about 76 percent. ... 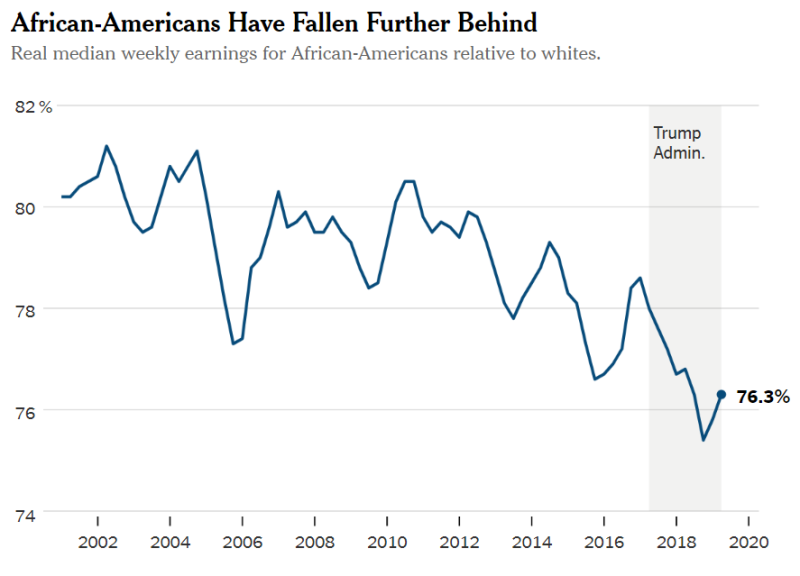 Another group of Americans who have not fared well over an extended period of time are manufacturing workers. ...

Another group of Americans who have not fared well over an extended period of time are manufacturing workers.

This graph suggests the current trend is consistent with the decline encountered during the Obama administration (under which the op-ed writer served) and that the last time African American's kept up with Whites in earnings was over the George Bush administration. So wouldn't an intellectually honest headline be that Trump has failed to reverse the trend that started under Obama?

So, how is a relative statistics like this, black vs. white, never black vs. Asian interestingly, even relevant to the question of whether black workers are being "left behind"?

Thanks, members of the overclass! You continue to caricature yourselves into irrelevancy...

Is there a reason that the article didn't also mark off the time period covering the Obama administration as well?

Maybe the total incomes the Times looks at are different because the stock market is doing so well and minorities couldn't save as much historically.

Now our President's helping us close the wage gap - at record low unemployment! - while shutting down trade and tax scams so we can all KEEP AMERICA GREAT!

Trump has one of the strongest economies on record. The desperation to find something, anything, wrong with him—he's a murderer, he's a rapist, he hates poor people—is damaging the NYT and others like it much more than it's damaging him.

The NYT further erodes its reputation with patently partisan writing. Seriously, are they ever going to get a clue?