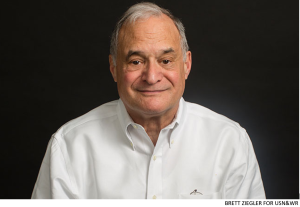 Robert Morse Received the “Lifetime Ranker Achievement Award” from the IREG Observatory on Academic Ranking and Excellence at their 2019 conference in May in Bologna, Italy. Morse has been at the helm of the U.S. News & World Report Education rankings since 1987. Over the last three decades, Morse led the expansion of U.S. News’ flagship Best Colleges rankings from a reputation survey to a data-driven evaluation of 1,800 schools across the country.

Jan Sadlak, former President of IREG Observatory from 2009 to 2018 and expert in higher education was also honored alongside Morse. IREG Observatory is an international institutional non-profit association of ranking organizations, universities and other bodies interested in university rankings and academic excellence. It was first created in 2002, with Morse as one of the founding members. Morse sits on IREG’s Executive Committee.

Data-driven? What? Is the data audited? No. Does US News undertake the slightest amount of effort to verify it? No. Is it gamed and manipulated by sundry institutions seven ways from Sunday? Yes. Is US News willing to meet with upstart university presidents to help coach them on how to best move up the rankings? If the reports on the behavior of my law school's university president are true, then yes. USNWR has done nothing so much as verify the underlying truths of Campbell's Law and Goodhart's Law.

Maybe we could rank this award. Base it on peoples subjective opinions on award merits. So we would know how to value it.