A report released Friday calls for sweeping changes at the University of Maine School of Law, including the addition of new faculty and administrative positions, expansion of course offerings and an overhaul of governance and operational practices [Committee to Advise on the Future Direction of the Law School, Report to the Board of Trustees of the University of Maine System (July 15, 2019)].

The report, commissioned by the University of Maine System and board of trustees in February, recommends that the law school enter a three-year transition period during which the changes could take place and that it do so quickly.

“Maine (School of Law) has already begun to cannibalize core functions in order to balance budget priorities,” the report says. “If Maine is to have a law school, then it must be repositioned within three years, funded and led by a skilled team as soon as possible.”

University officials Friday did not have an exact figure on how much it would cost to implement the wide-ranging recommendations of the report, but James Erwin, chairman of the UMaine System Board of Trustees, estimated it would require “millions of dollars at least.” ...

In recent years, the need to offer financial incentives to attract students has contributed to budget woes that have led to faculty positions going unfilled and high turnover.

The report comes at a challenging time for the law school, which is searching for a new dean after the departure of Danielle Conway and has had to turn to the University of Maine System and University of Southern Maine for $2.67 million to stabilize the budget over the last three years. The law school’s current budget is $5.69 million. ... [T]here are concerns about how to continue attracting students while relying less on scholarship incentives and a need to increase diversity.

The report recommends expanding course offerings, including through online learning, partnerships and hands-on opportunities, and investments in rural areas of Maine where lawyer shortages have been well-documented.It also calls for permanently funding a program that brings students of color, immigrants and low-income undergraduates to Maine for a three-week intensive legal curriculum with the aim of increasing diversity.

In order to execute such investments, the school would need to fill open faculty positions, restore funding for at least two tenure-track positions and budget for cost-of-living and merit-based salary increases. A study on faculty salaries would be commissioned to ensure faculty are being paid appropriately. Since 2013, faculty at the University of Maine School of Law have foregone nearly $200,000 in wages because of suspensions on cost-of-living pay increases.

There are currently 16.5 faculty positions at the school, 10.5 of which are tenured or tenure-track. Those numbers represent 6.5 fewer tenured or tenure-track positions and 4.5 fewer full-time faculty from 2010, meaning an increasing number of courses are being taught by adjunct or visiting instructors. In addition, 8.5 non-faculty positions have been permanently retrenched or gone unfilled since 2010, the report said. ...

The success of the law school at the end of the three-year period would be measured on a set of metrics that is being developed, but could include performance points such as acceptance rate, bar passage, number of applications and faculty scholarship. The same metrics also would be used to evaluate the new dean and law school administrators. Specific targets and a time frame would be set by a board of trustees oversight committee and interim dean, the report says.

Here are Maine's entering statistics for the past nine years: 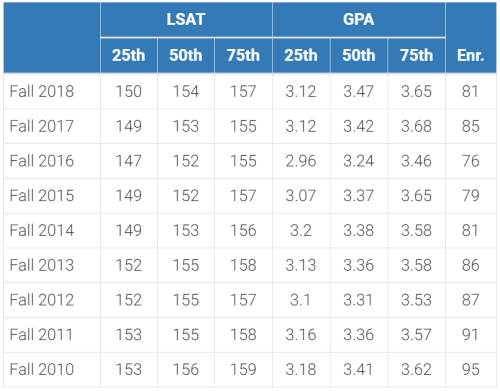 Maine is one of the least "diverse" states in the country. To increase "diversity" the U will have to recruit students from other states, bribe them with scholarships and other bennies - and go further into debt. Sounds like a winning strategy!

"I am sure "diversity" will save them."

My understanding is that the Somali immigrant population to some of Maine's long-decaying mill cities is just about the only thing keeping those places alive, as the MAGA dogwhistles have not yet brought the shoe factories back to life.

I am sure "diversity" will save them.

The degree costs over $100k in-state. 51.8% of students are employed at graduation, earning a median income of $52,000 per year. (That number might be inflated, per the various machinations law schools use to calculate salary.)

While the school is inexpensive compared to others, the return is abysmal.

I work at the Flagship campus in Orono/Bangor. It's been known for years that the Portland campus spends like the Progressive moonbats they are. Recently, the state reorganized the State University System into a "single entity" so that the rest of us could pull their dead weight. I don't see much improving now that former Connecticut Democrat Governor Dan Milloy has just been appointed chancellor of the System.

So.... Maine Law is arguably the poorest state in the Northeast, with a stagnant (at best) and aging population with few new entrants, has the lowest median income north of North Carolina, is one of two states east of the Mississippi with no Fortune 500 corporations HQs, has vast tracts of very sparsely populated land, the largest city is about as large as a medium-sized suburb in the BosWash corridor, and by the time you get to the fourth largest city, which I believe is the state capital, you are looking at "small towns." In this environment of bleak economic outcomes present and future, the proposed solution for a money-losing law school is to... throw a bunch more money at it?