Economic inequality is on the rise in Illinois, and the state government is part of the problem. Illinois taxes low-income families at much higher rates than high-income families, asking the most of those who have the least.

Low-income households in Illinois pay about 14 cents in state and local taxes from every dollar of income, while the state’s most affluent households pay about 7 cents per dollar.

That gap between the poor and the wealthy in Illinois is one of the largest in any state, but the poor pay taxes at higher rates in 45 of the 50 states, according to a 2018 study by the Institute on Taxation and Economic Policy.

It’s a bipartisan phenomenon. The institute’s list of the 10 states with the most regressive tax systems — the states doing the most to increase inequality through taxation — also includes conservative Tennessee and Texas, purple Nevada and Florida, and liberal Washington.

Now Illinois is trying to take its name off the list. The state plans to hold a referendum next year on a constitutional amendment that would authorize the state to tax higher incomes at progressively higher rates — the system used by the federal government and 32 states. ... 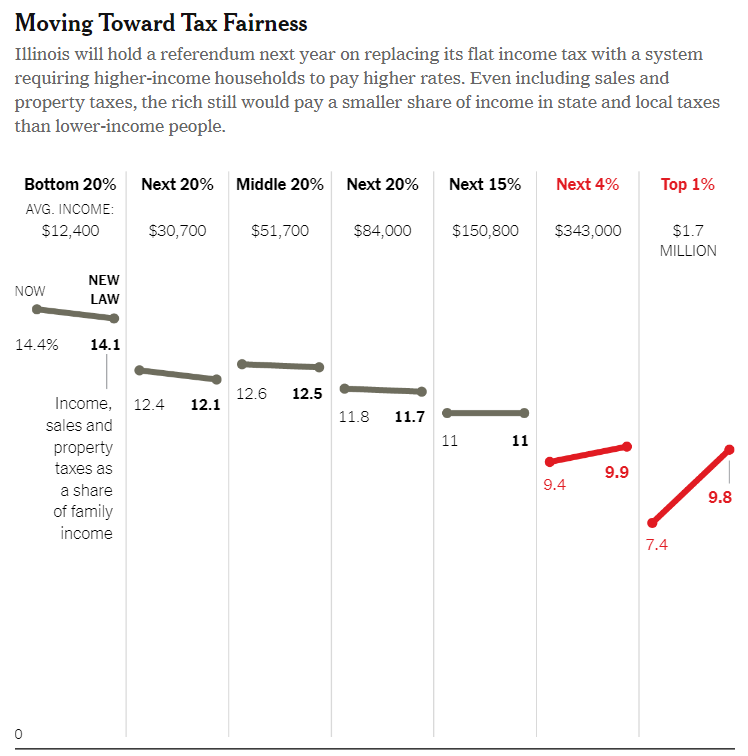 Opponents of progressive taxation warn that wealthy people and businesses will flee to other states, and that those with the most money are the most mobile. People can vote with their feet, and some do prefer low-tax states like Florida. But a quick look at the list of states with progressive tax structures should make clear that plenty of rich people choose to stay put. ...

The potential cost of losing a few millionaires also needs to be weighed against the benefits of equitable taxation. By imposing a somewhat larger burden on high-income households, states can significantly improve the material circumstances of lower-income households and slow the troubling expansion of economic inequality.

At the very least, states ought to stop making things worse.

Based on the equitable arguments of this NYT editorial, you’d wonder why NY is so upset about the SALT deduction limitation. It merely removes a federal tax subsidy for those wealthy individuals with high income (high state and local income tax) and high end homes (high state and local property tax), thereby “imposing a somewhat larger burden on high-income households” and creating a more progressive tax system.
Perhaps the real solution is to be found on the expenditure side, and not the revenue side of the equation. But one wouldn’t expect New York state government, or the NYT, to give that much consideration. Particularly given their stance on the SALT cap, which takes away a subsidy to the wealthy and puts pressure on states to keep their income and property tax rates from climbing higher, since it would no longer be at the expense of the federal government’s fisc.

"That gap between the poor and the wealthy in Illinois is one of the largest in any state, but the poor pay taxes at higher rates in 45 of the 50 states, according to a 2018 study by the Institute on Taxation and Economic Policy."

The inequality deniers will likely outnumber the climate change deniers. P.S. And change, if there is any, will be slow to come and minor at that.

Nobody denies the income inequality, merely its causes. And whether it is something we should be concerned about, and if so, what should be done about it.

In addition, I have yet to meet anyone who seriously denies the climate is changing, but again, the important questions are, how much and what are the causes. And whether it is something we can actually impact with anything humans can do, and what are the other unintended consequences of those actions. Only ignorant people uncritically accept the dumbed-down over-hyped media portrayal of the climate change issues.

Whatever happened to the notion of a government reducing spending? This way EVERYBODY gets a tax cut. I know, I know, I'm old.