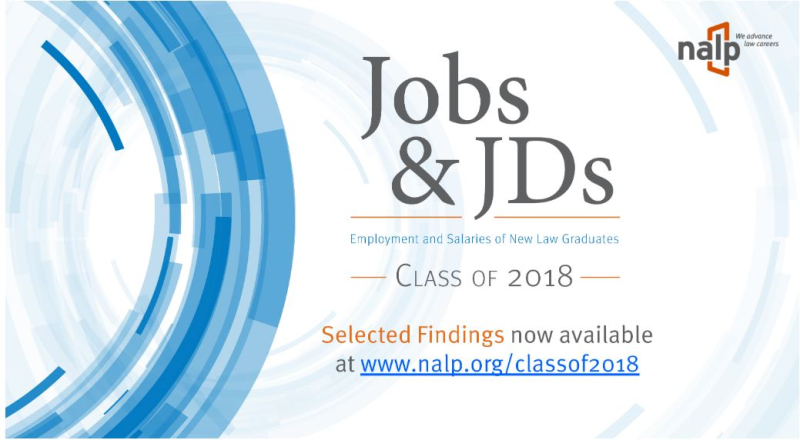 “The employment outcomes findings for members of the Class of 2018 are strong and, along with the findings for members of the Class of 2017, clearly mark the beginning of a new post-recession cohort. The employment outcomes for this class more closely resemble employment outcomes measured in the years before the recession than they do the classes that graduated between 2009 and 2013 in the immediate aftermath of the recession,” noted James G. Leipold, NALP’s executive director. “Certainly, the overall employment rate has improved because of two intertwined factors. First, and most importantly, the smaller graduating class has meant that there is less competition for the jobs that exist. Second, large law firm hiring has increased steadily since 2011, adding more than 1,900 jobs in seven years.”

Overall, the number of jobs in private practice has fallen by more than 4,000 since 2007 and grew this year for the first time in five years, but only very slightly, by just 21 jobs, to 16,411 jobs. And while the largest law firms of more than 500 lawyers hired more law school graduates than at any time since the recession, the number of entry-level jobs at those firms is still off by more than 400 positions compared with the peak hiring measured with the Class of 2008. Moreover, firms with between 251 and 500 lawyers now provide only half the number of jobs compared with before the recession, just 966 jobs for members of the Class of 2018, compared to 1,815 jobs for members of the Class of 2007. ...

The stability of the median salary may seem surprising given that a number of large firms in major markets increased their starting salaries to $190,000 between the time that the Class of 2017 graduates and Class of 2018 graduates started working. However, the effect of these increases was simply to shift the distribution of salaries in the upper half of the salary range, with little effect on the middle range. Nevertheless, the effect of the $190,000 salaries is seen in the national median salary at law firms, which, based on reported salaries, climbed to $120,000, the fourth increase in a row.