While much has been said about the curiosity of the American law review submissions system, something even more curious has been overlooked: American legal scholars ignore the impact-factor of journals, and choose in which journal to publish based on publishing school’s ranking. To investigate whether ranking translates into impact, we collect and analyze historical data from American law journal’s impact-factor and the ranking of their publishing law schools. We first show that there is a correlation between prestige ranking and impact-factor over the years. However, the correlation is not perfect and it varies substantially over time. Second, journal impact-factor shows a larger inter-annual variation than school ranking. This means that impact-factor is a worse predictor of future journal impact than school ranking is of future school prestige. Third, we show that journals published by better law schools have higher inter-annual variation in impact-factor but lower variation in impact-factor based ranking. This result is surprising. We hypothesize that journals from high-ranked schools belong to a less homogeneous pool: few journals make most of the impact due to an exposure bias. We then move to consider authors’ utility from publishing in one journal or another. The optimal strategy for authors will depend on whether they prefer to maximize their prestige among their peers or their impact on the discipline, and how risk averse they are. Conditional on desiring impact, risk-averse scholars should look at school ranking and risk-neutral scholars should look at impact-factor. 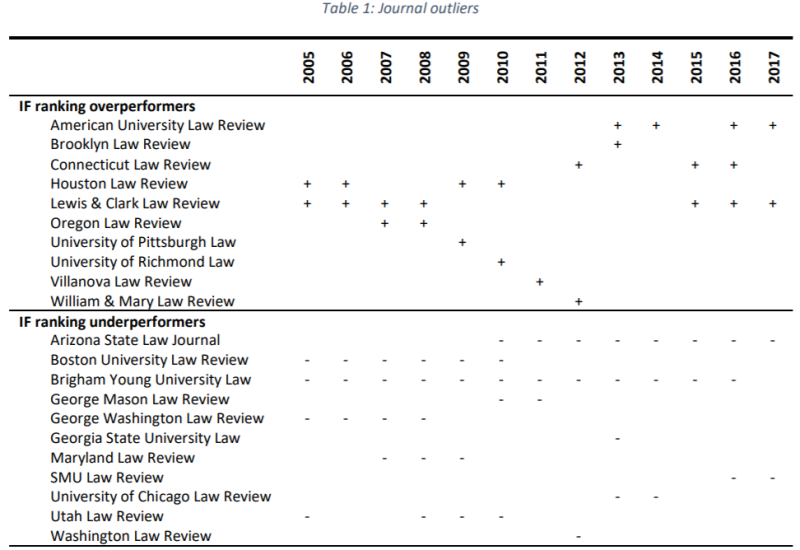 For impact, send a few thoughtful, focused paragraphs at a time to this (and other) Web sites. Have you seen those hit-counts?!?