How Much Do Coaches (And Deans) Matter?

Wall Street Journal op-ed:  How Much Do Coaches Matter?, by Sam Walker (author, The Captain Class: The Hidden Force That Creates the World’s Greatest Teams (2018)): 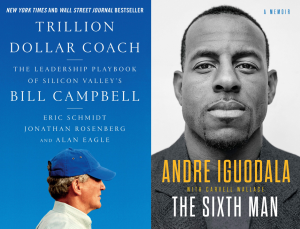 In 1979, Bill Campbell quit his job as head coach of Columbia University’s chronically dreadful football team. He moved to California to work for Apple and eventually became chief executive of Intuit.

The decision that made Mr. Campbell a Silicon Valley legend, however, involved a return to his roots. When he died in 2016, he was, according to a new biography, “the greatest executive coach the world has ever seen.”

To the authors, there’s no question Mr. Campbell deserves enormous credit for the success of the companies he worked with. “A trillion dollars understates the value he created,” they wrote. Without his “integral” guidance at Google, they argue, “the company would not be where it is today.”

After finishing this book, I met up in New York with another author who knows a thing or two about coaches: Andre Iguodala.

The 35-year-old Mr. Iguodala has played for four different NBA teams. As the primary captain of the Golden State Warriors, he’s made five straight trips to the NBA Finals since 2014, won three championships and set the league record for wins in a single season. Last Sunday, the Warriors, now in rebuilding mode, traded him to the Memphis Grizzlies, which would be team No. 5.

In his 15 seasons, Mr. Iguodala has earned a reputation as one of the NBA’s most thoughtful and outspoken players, and in his new memoir, The Sixth Man, he offers candid reviews of the coaches he’s played for. While Golden State’s Steve Kerr earns high marks, others don’t fare so well. ...

In [Mr. Iguodala's] view, a team’s ability to win depends less on the coach’s modus operandi than how well the players organize themselves around it—or in some cases, in opposition to it. ...

These two books present vastly different takes on coaching. Mr. Campbell’s acolytes seemed to crave his input and follow his advice with minimal skepticism. To Mr. Iguodala, every coach basically dumps out a different box of Legos and forces the team to build something.

They can’t both be right—or can they?

My own research into great dynasties in sports tends to support Mr. Iguodala’s view. The one similarity I’ve found between teams that sustain excellence is the presence of a selfless, relentless, highly principled captain. Mr. Iguodala is a fine example of the species.

A brilliant coach helps, but only if that person forms a trusting, two-way, mutually respectful partnership with the team’s player-leaders.

In many ways, Trillion Dollar Coach suggests that Mr. Campbell was an exception: a singular talent ideally suited to his moment. He was humble, loyal and compassionate but also ruthlessly direct. He broke down barriers between people with bursts of profane language and giant bear hugs. ... I started to wonder if “coach” was the most appropriate term for him. Sometimes, when the situation demanded it, Mr. Campbell functioned more like a captain. He actually played the game.

Mr. Iguodala, like Mr. Campbell, believed that a coach’s influence is only as strong as the team allows it to be. A captain’s job, he believes, is to adapt the team to its coach—which in this case meant keeping his teammates from abusing Mr. Kerr’s trust by growing lazy or sloppy. He forced them to police themselves.

To turn the Warriors into a dynasty, however, Mr. Iguodala had to realize something else about great teams. “The superstar,” he says, “is never the ultimate leader.” ... On the Warriors in 2014, Stephen Curry had every right to claim the leadership mantle. He was already the greatest 3-point shooter in NBA history. But to Mr. Iguodala’s immense relief, he didn’t want the job. “We’ve had that conversation,” Mr. Iguodala says. “We’ve talked about how on great teams there’s always a player we call the ‘supervet.’ He’s usually the leader. The superstar respects him and so everyone else respects him.”

Mr. Iguodala knew that to move the team forward, he needed to step back into the shadows where Bill Campbell worked. “I do a lot of things that go unnoticed,” he says, “and I’m totally fine with that.”

The truth about coaches is that they matter a lot—but they shouldn’t be worshiped or blindly followed. They’re just one piece of a complex dynamic that takes many forms. On great teams, everyone syncs their behavior in complementary ways until they form the most potent combination.

Leadership, in any field, isn’t about barking orders or taking big shots, Mr. Iguodala says. It’s about being flexible enough to find your place in an intricate system of action and reaction.

“It’s about the ability to embrace a role.”