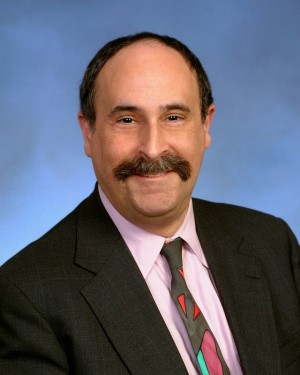 The Chicago-Kent College of Law community mourns the death of Professor of Law Emeritus Jeffrey G. Sherman, a one-of-a-kind professor who served as an institutional conscience to the law school for 32 years. He passed away recently at the age of 72.

“Jeff Sherman was a gifted teacher, a fabulous colleague and a zealous defender of the integrity of the English language,” says Chicago-Kent Dean Harold J. Krent.

Sherman was born in Brooklyn, New York, and spent his childhood growing up in New York's Long Island suburbs. Betsy Sherman, his younger sister, says that they both hated the suburbs and as teenagers would frequently go into New York City for music, dance, film, museum, and theater experiences. He was brilliant, she says, and they shared such a strong affinity for film and theater that quoting lines from these works became their own secret language. Betsy Sherman says Sherman was a wonderful pianist, who wrote a full musical in high school and a Latin Mass. He hated sports.

“Whenever I dragged him to go watch baseball he would always want to bring a book and I would get mad,” Betsy Sherman said.

Sherman was the valedictorian of his graduating class at Lynbrook High School in Lynbrook, New York and went onto Harvard College, where he majored in economics. He graduated magna cum laude, and Betsy Sherman recalls that his senior-year thesis was on the economics of Broadway. Sherman taught mathematics at a public high school in Connecticut before returning to Harvard University for his law degree. He was a staff member of the Harvard Civil Rights-Civil Liberties Law Review. After graduation, Sherman went into private practice with Doherty, Rumble & Butler in St. Paul, Minnesota for three years, followed by a year with the Office of the Tax Legislative Counsel in the United States Department of the Treasury in Washington, D.C.

Sherman wrote extensively in the areas of wills, taxation and employee benefits, and is the author of Cases and Materials on Pension Planning and Deferred Compensation. He was a member of the American Law Institute. In 1989 he was named a Norman and Edna Freehling Scholar and an Arthur and Marjorie West Scholar. In 1991 he was elected an academic fellow of the American College of Trust and Estate Counsel.

Gary Laser, associate professor of law emeritus, said that Sherman was known for his dedication to the English language and its proper usage. Among his colleagues, he was known as the law school’s grammarian and had a blog titled, “I Am the Grammar Fixer.”

“For me, what I will most cherish about Jeff, besides his wicked sense of humor, was his passion for the accurate use of language,” says Dan Tarlock, professor of law emeritus. “Jeff understood the power of language and wanted it used to express thoughts as clearly possible, be it for the explanation of a legal principle, the meaning of a poem or literary passage, or a wry put down of a politician.”

Sherman’s love for the arts and humanities continued throughout his life. Rick Buhrke, his partner of 25 years, says that Sherman was the perpetual planner of these experiences, from picking the perfect seats for the Chicago Symphony Orchestra or at Steppenwolf Theatre, to planning their annual New York City theater trip. For a few years, he volunteered with Lyric Opera of Chicago and gave public lectures on opera at libraries, senior centers and other venues in the city’s north suburbs. After he retired Sherman took continuing education classes in poetry at Northwestern University.

Sherman loved to travel, especially on cruises around the world, which included trips to South America and northern Europe. Trivia and quiz nights are a popular activity on cruise ships, Buhrke says, and Sherman, who had “a steel trap for a mind,” was always a leading team member. He had a great love of history and enjoyed reading history books.

“He loved visiting historic sites. He wanted to see cathedrals, castles and monuments,” Buhrke says. “I was the photographer and he would take photos in his mind. He would remember all of the details at every site.”

Sherman fought for his ideals and was incredibly honest in every part of his life. He was the type of person who would remain for a waiter at their table if an item such as a drink was left off of their dinner bill, Buhrke says. While others may have left a larger tip or ignored the mistake, Buhrke says that Sherman would say, “what is right is right.” Honesty and integrity were important to him. Sherman was dedicated and loyal to his family and friends. He loved teaching and loved his students.

“He was the most loyal, true blue person you will ever meet,” Buhrke said.

Laser, who knew Sherman for more than 40 years, said that he had a genuine care and concern for people and was an honorable and decent person.

“I was always delighted to have him as a good friend,” Laser said. “He was trustworthy, smart and loyal. I can’t extoll his virtues enough as a human being.”

The Chicago-Kent community will hold memorial services for Sherman at 4 p.m. on, Wednesday, July 17 in Morris Hall on the 10th floor of the law school, which is located at 565 West Adams Street in Chicago.

Sad to hear of Prof. Sherman's passing. He was well regarded. I remeber when I was kid, my dad was helping Prof. Sherman move to Chicago in the summer of 1978 and I was enlisted to help.