The Issue: Many Americans have not felt the benefits of strong GDP growth in recent decades, as thirty-five years of rising income inequality have concentrated the income growth at the top of the distribution. While the federal income tax system is progressive, it has failed to counter these trends, and some of our tax policy changes have in fact exacerbated inequality. At present, many feel that the U.S. government needs more revenue for urgent fiscal priorities such as infrastructure, yet the federal government is operating with high budget deficits and debt. Thus, as policy-makers search for new revenues, some are eager to increase tax payments by those at the top of the income distribution.

The Facts: Economic inequality has increased dramatically in the United States, and because of this, gains in real GDP per-capita are often not felt by many in our society. (See chart.) 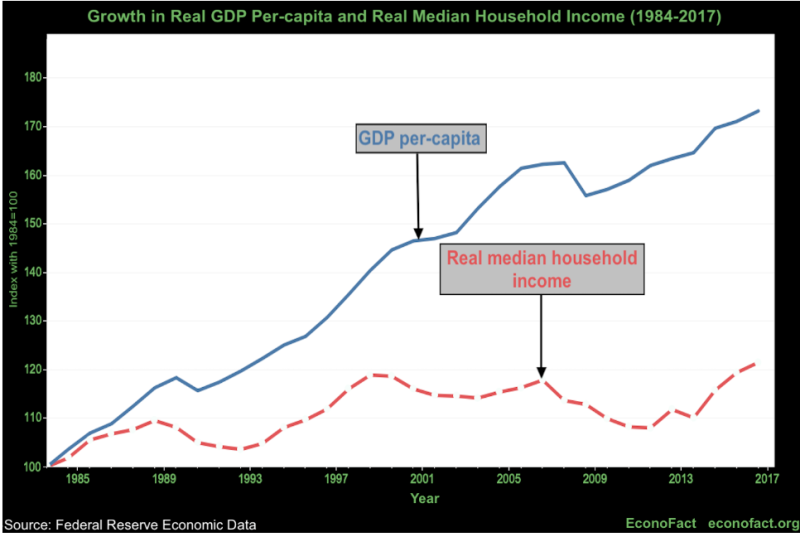 What This Means: In recent decades, gains in national income have failed to reach many Americans due to increasing income inequality; countering such trends requires increasing the progressivity of our tax system. Proposals that seek to reduce tax avoidance and harmonize the tax treatment of different types of income are likely to raise more revenue at lower rates than more narrow proposals. Many new proposals provide a useful starting point, but they all need careful consideration in order to be ready for implementation. It is also important to remember that economic inequality is not just a “top end” problem. The tax system can also usefully help those at the bottom of the income distribution who have experienced stagnant wage growth in recent decades. Proposals to expand the earned income tax credit do just that, by subsidizing the wages of low-income workers. Pairing an expansion of the earned income tax credit with careful, efficient methods of taxing the rich would tackle economic inequality from both ends.

If high taxes on the rich correspond with real household income growth, as the chart shows in the 1990s, why are we also seeing it now, with a slope as steep, when the rich aren't paying taxes on par with the 1990s?

Plus, that chart also omits 2018 results, which only showed a continuing upward trend in real household income.

The Tax Cuts and Jobs Act slashed tax avoidance, going all in on OECD advice. And it harmonized different types of income: now the total tax on C corporations most of us can buy a few shares in, is not unfairly higher than rich peoples' closely held companies Bill Clinton's Treasury let "check the box" for passthrough treatment in 1996.

Maybe a bigger EITC would help people get on their feet if the government would control the enormous wrong-payment rate.

But how about they stop running lousy trains to nowhere and get on board with the President's plans (or *some* plans) to stop getting gouged for drugs and so much else before clamoring for MORE spending?