Burk: The State Of The Entry-Level Law-Jobs Market And Its Implications For The Future Of Legal Education

Following up on my previous post, Bernard A. Burk (formerly North Carolina), The New Normal Ten Years In: The Job Market For New Lawyers Today And What It Means For The Legal Academy Tomorrow, 12 FIU L. Rev. 341 (2019):

Bernard A. Burk (formerly North Carolina), New Study on the State of the Entry-Level Law-Jobs Market and its Implications:

Part I: Where the Job Market for New Law Graduates is Today:

After a lengthy and precipitous drop that began after 2007, the number of strongly law-grounded entry-level jobs obtained by new law graduates within ten months of graduation finally appears to have levelled out. ... Why, then, you may well ask, is there persistent talk of the entry-level job market’s purported improvement, and even suggestions that it is “hot”?  (NALP, to its credit, has been more nuanced than the industry press.)  Well, the percentage of new graduates obtaining a Law Job has risen steadily since 2011.  And how can the portion of the graduating class getting a Law Job increase while the number of Law Jobs falls?  Easy:  The number of students graduating law school has been falling faster than the number of Law Jobs.  Here’s a picture: 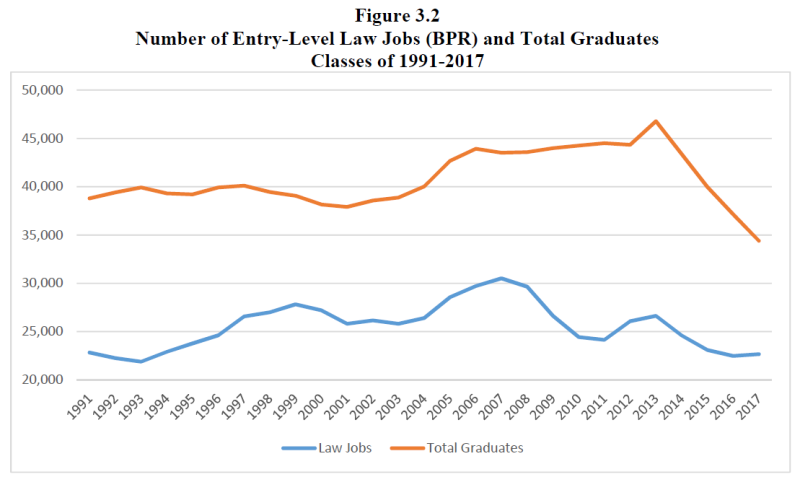 Part II: What the Market is, and What the ABA is Not, Telling Us about “JD Advantage” Placements:

As Bar Passage Required jobs become more available (not because they increase in number, but because the number of graduates seeking them starts falling faster than the number of Law Jobs is falling), the number of JD Advantage placements begins to fall again. Here’s a picture: 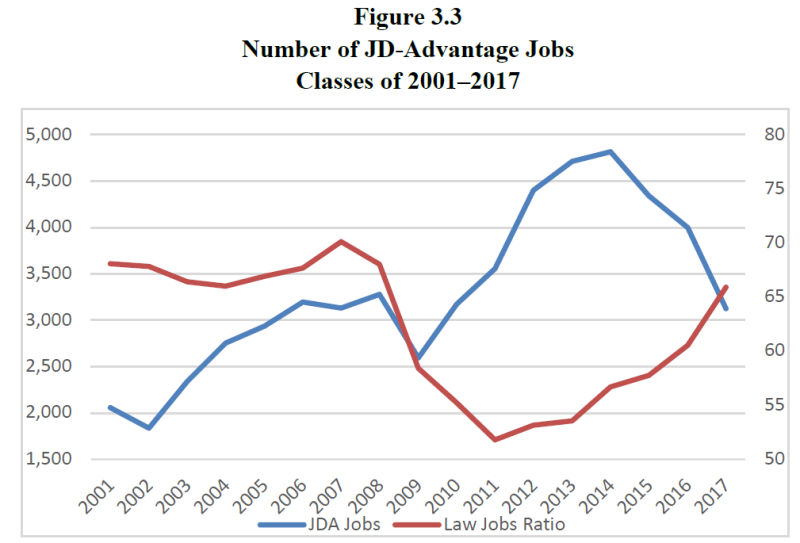 Part III: The Future of the Entry-Level Law-Jobs Market:

[O]ut of all the sectors of the entry-level Law-Jobs market there is one, and only one, that is growing at any significant pace. The number of Law Jobs in every other sector is roughly flat or sinking. The growth sector is Very Large Law Firms (500+ lawyers), which currently consumes about 12.5% of the graduating class. 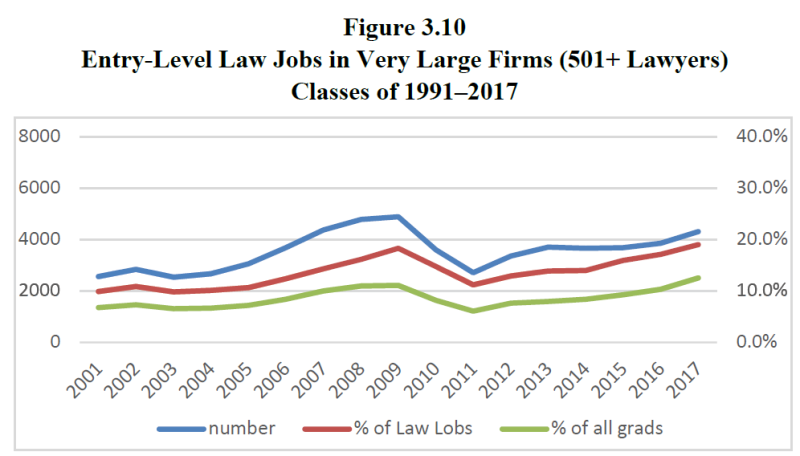 Part IV: What the Current State and Likely Future of the Law-Jobs Market Means for the Legal Academy:

[T]here is little reason to believe that appreciably greater numbers of Law Jobs will be available to the class of 2021 than are available today.  The continuing improvement in the Law-Jobs Ratio (the proportion of the graduating class obtaining Law Jobs within 10 months after graduation) is attributable specifically and uniquely to the substantial decline in the number of law graduates seeking employment.  Thus continued improvement for future graduating classes of the Law-Jobs Ratio, which is a direct measure of the likelihood of the average graduate’s obtaining a Law Job, is in most cases likely dependent on keeping entering classes at or near current sizes.