Many casual observers of the American legal academy are aware of the substantial falloff in both the number and the conventional qualifications of applicants to law school that began after 2010. But few appreciate how widespread and serious its effects have been. For the vast majority of law schools, those effects have been somewhere between significant and devastating.

From 2010-11 through 2016-17, the number of unique applicants to accredited law schools fell 36%, and the number of applications fell 44%, while students with the best conventional qualifications disproportionately stayed away. The effects on the academy have been profound, and sectors of the academy distinguished by their relative overall reputation for quality have reacted differently. Beyond the strongest law schools, many shrank by between a third and a half, and dropped 15 LSAT percentiles. We estimate that aggregate annual tuition revenue for all accredited American law schools fell over $1.5 billion from its inflation-adjusted peak in 2011-12. Generally we found, as might be expected, that the weaker a law school’s relative reputation for quality, the more difficulty it had attracting students with the credentials it sought, so that as reputation decreased, entering-class credentials (“Profile”), entering-class Size, and average tuition actually paid (“Net Tuition”) also decreased. But this general and unsurprising finding came with some surprising variations and exceptions. These results lead to four observations with important implications for the legal academy: 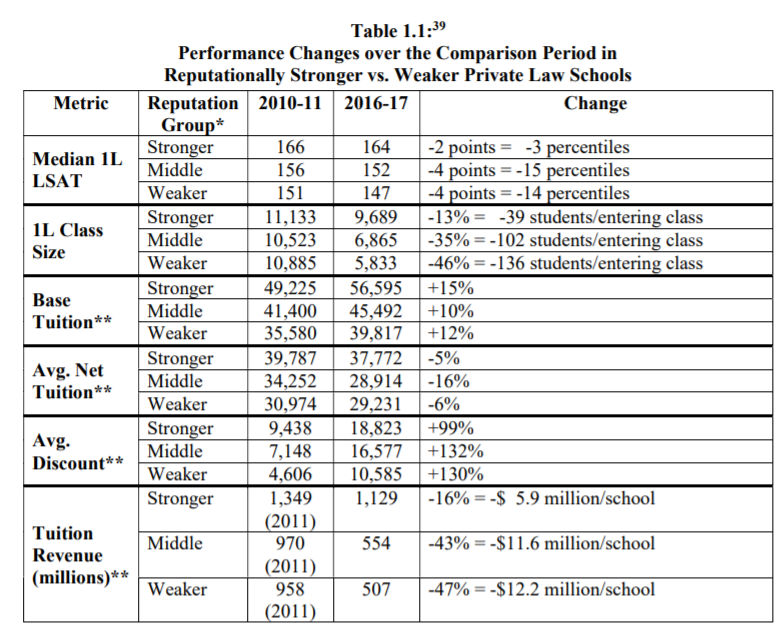 First, reputationally stronger schools generally chose to preserve entering-class Profile, even when they had to shrink class Size or discount tuition to do so. This strategic drive to keep Profile up at the expense of Size and Net Tuition left literally thousands of viable candidates available to other law schools, and effectively prevented the closing of as many as 20 reputationally weaker schools.

Second, many law schools have forgone millions of dollars in tuition revenue per year to keep up their entering-class Profile. Different admissions choices could have yielded resources that might have been available to serve educational needs. We encourage discussion of the implications of this investment choice.

Third, some reputationally weaker law schools perversely were able to maintain or raise their average Net Tuition, while many stronger schools found themselves forced to discount more aggressively. Because discounts at any specific law school, and more generally across all law schools, tend to flow to stronger students, the students with the least promising prospects for obtaining or making any economically sustainable use of their law degrees are paying the highest prices to obtain them. These inequalities expanded significantly after 2010.

Fourth and finally, because both tuition revenue and Profile decreased at many law schools, the distance between student needs and school resources has widened—millions of dollars in forgone tuition revenue are unavailable to meet the needs of students that at many law schools are significantly less prepared and qualified than their predecessors. The recent decreases in Bar Examination performance nationwide are a likely consequence of this growing incongruity. 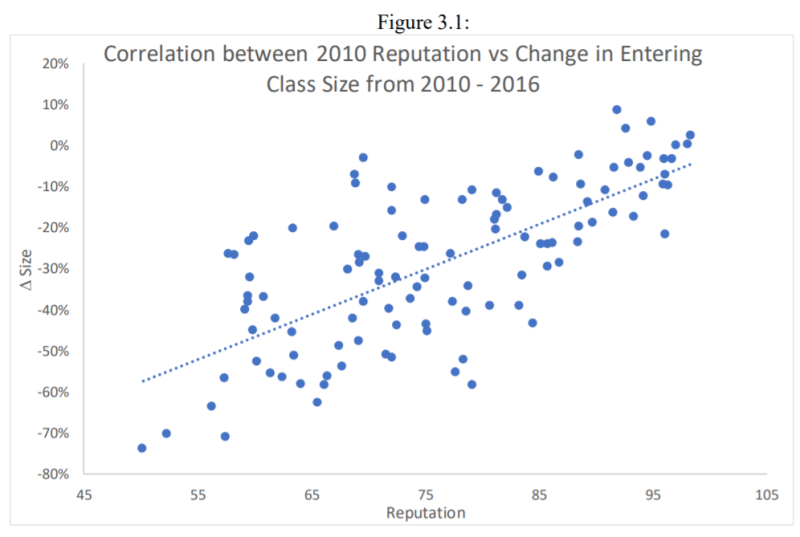 Bernie Burk (formerly North Carolina), How the Legal Academy Has Changed Since the Great Recession (Hint-It's Probably a Lot More Than You Think)