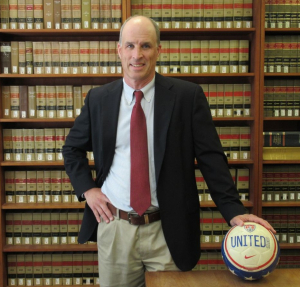 Steven Bank is one of the most respected American authorities on the subject of soccer and the law. The Paul Hastings Professor of Business Law at UCLA School of Law, Bank focuses much of his writing and teaching on the law and history of taxation, corporate governance and executive compensation. But he also kicks out scholarly essays on legal issues involving soccer’s governing bodies, including FIFA — the international soccer federation sponsoring the 2019 Women’s World Cup. He teaches classes on soccer and the law, both at UCLA Law and as part of UCLA’s undergraduate Fiat Lux seminar series, and is a prolific writer and tweeter on soccer, soccer law and international sports law. When not at work, Bank, who is also the law school’s vice dean for curricular and academic affairs, is often on the soccer pitch, playing pick-up ball, coaching local youth teams, supporting his four children as they play, and serving as a referee or administrator for youth leagues and club teams.

What makes soccer a compelling subject for your scholarship?

Soccer is effectively a private business with a public mission, which makes it a rich area for research and writing. Unlike most American sports, where the league is the governing body and sets its own rules, soccer is governed by national and international organizations that are largely unaccountable despite ostensibly being governed by their members. Given the influx of money in the sport in the last 50 years, especially at the global level, this has created significant legal pressures on outdated corporate governance structures. Compounding those pressures is the fact that soccer is considered a public good by its fans, despite being run as a private enterprise. This has increased the calls for transparency and accountability from both politicians and fans. ...

Please describe the perfect soccer weekend for a visitor to Los Angeles.

Southern California is such a diverse and vibrant place for soccer that a visitor should have no shortage of options. There might be a friendly between two high-profile international clubs at the Coliseum, an L.A. Galaxy or LAFC game, or any number of competitive adult games in Griffith Park or other area fields. And if the visit is in 2026 or 2028, there might be a World Cup or Olympic final on tap at the new Rams stadium in Inglewood.

On an average weekend on this side of town, if you’re not coaching/refereeing/watching two-to-three youth soccer games like me, then I might recommend starting the day bright and early with English Premier League action at a pub such as the Cock ‘n Bull in Santa Monica, heading out in the afternoon to Venice Beach for some pickup futsal (hard-surface soccer) and possible celebrity player sightings at the Venice Beach Football Club’s Estadio de Dogtown, and ending the day at UCLA’s Wallis Annenberg Stadium to cheer on the UCLA men’s or women’s teams.