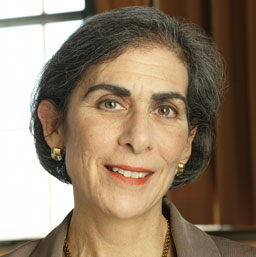 Few people seem satisfied with Penn Law's latest response to the professor's comments, highlighting the fraught nature of free-speech issues for deans and other administrators who must balance competing pressures.

University of Pennsylvania Law School Dean Ted Ruger found himself in a familiar spot last week—caught between outraged students demanding sanctions against Amy Wax for what they view as her racist public comments and free-speech advocates who believe that the controversial professor has a right to air her views, however offensive.

Ruger had been in a similar position at least twice in the past two years when Wax published op-eds and gave interviews that were widely perceived as denigrating immigrants and black students at the law school.

The dean has taken a middle-of-the-road approach with Wax, and in the latest incident issued a statement condemning her comments as racist. He also said that they do not reflect the law school’s position, but did not take formal action against her. Penn Law said Wax will be taking a previously planned sabbatical during the upcoming school year, however.

The recent controversy stems from Wax’s statements that U.S. would be “better off with more whites and fewer nonwhites,” during a panel at a national conference for conservatives.

Ruger’s latest response seems to have satisfied few people on either side of the matter. A consortium of Penn Law affinity groups and student organizations Tuesday issued a statement saying that the law school will continue “perpetuating white supremacy” as long as Wax remains on the faculty. (They had earlier circulated a petition calling for Wax to be removed from teaching.)

Meanwhile, some legal academics and free-speech advocates have rebuked Ruger for what they see as overstepping. Those critics argue that it’s not the place of a dean or a law school to weigh in on the content of a professor’s speech. ...

Josh Blackman, a professor at South Texas College of Law Houston and a conservative who has also been protested by students for his views, said in an interview Thursday that Ruger went too far. ...

Erwin Chemerinsky, dean of the University of California, Berkeley School of Law and author of a recent book on campus free speech, said that deans have a responsibility to publicly disown racist speech while also resisting pressure to punish the professors responsible for that offensive speech, which is essentially the balance Ruger struck this week. Wax should not be fired for her comments, he added, but others should exercise their free speech rights to reject her conclusions.

Professor Wax: "I don't think I've ever seen a Black student graduate in the top quarter of the class, and rarely, rarely in the top half ... I can think of one or two students who scored in the top half in my required first year course,"

University of Pennsylvania Law School dean Theodore Ruger: "Black students have graduated in the top of the class at Penn Law."

@ Michael W. Perry,
The remarks attributed to Prof. Wax are in their own terms a matter of opinion and therefore not susceptible to proof as "true" or "false." She is expressing a value judgment.

The dean did not yield to the demands of "outraged student," who wanted him to take disciplinary action against Prof. Wax.

"Left virtually unsaid in this debate is whether Prof. Wax's remarks are true, meaning can they be supported by evidence. "

Let me fix that for you, Mike. Wax's statements were supported by ZERO evidence beyond her say-so, and the university admin who actually has access to everyone's grades said she was wrong. The end.

There's something that a university believes truly competes with free speech and open inquiry? And that thing is "outraged students?" How has the university environment turned upside down since the 1960's, when free speech was what students demanded? Modern leftist students have become self-ridiculing parodies. And college administrators spineless jellyfish, without an ounce of adult responsibility and integrity.

Quote: "... outraged students demanding sanctions against Amy Wax for what they view as her racist public comments and free-speech advocates who believe that the controversial professor has a right to air her views, however offensive."

Left virtually unsaid in this debate is whether Prof. Wax's remarks are true, meaning can they be supported by evidence. This debate has focused on free speech because much of present-day academia would rather chant PC dogmas than debate facts. Law schools seem particular resistant to releasing the very facts on which debates can take place.

I don't agree with Wax's views but I think it's a mistake to retaliate against her. Better to refute her views than to retaliate. The latter tactic will simply be use by the other side when and if they have control.