A Kosher Fourth Of July 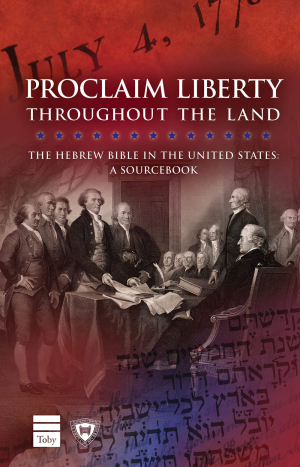 Two hundred forty-three years ago, a new nation was inspired by the Old Testament.

Since that fateful July 4 when the Second Continental Congress invoked the unalienable rights to life, liberty and the pursuit of happiness to declare independence from King George III, an argument has raged over the Christian roots of the American Founding. Now a group of scholars suggest that if we are looking only to the Gospels to understand the new American nation, we may be arguing over the wrong testament.

“The American Republic,” they write, “was born to the music of the Hebrew Bible.”

The book is called Proclaim Liberty Throughout the Land: The Hebrew Bible in the United States: A Sourcebook. The title comes from Leviticus and is inscribed on the Liberty Bell in Philadelphia. The book comes courtesy of the Straus Center for Torah and Western Thought at Yeshiva University, where it was pulled together by Meir Soloveichik, Matthew Holbreich, Jonathan Silver and Stuart Halpern.

These men are not arguing that America was founded as a Jewish nation. Nor is their subject Jews in America, or the role of Jews in the American Founding. Their proposition is more supple and profound: that at key moments in the national story, Americans have looked to the ancient Israelites to understand themselves, their blessings and their challenges.

The evidence, they say, is all around us. The American landscape is dotted with town names that reflect this understanding, from the Zions, Canaans and Shilohs to the Goshens, Salems and Rehoboths. And whether it is John Winthrop invoking a “covenant” to characterize the order the Puritans established with Massachusetts Bay Colony, or Martin Luther King more than three centuries later talking about having been to the mountaintop, Americans have long looked to the biblical Israelites for the “political and cultural vocabulary” to explain the American proposition.

Though this American affinity for the Israelites pre-dates the Revolution, the war for independence intensified the parallels. In their revolt against George III, the men of the 13 colonies saw themselves as modern Israelites escaping a latter-day Pharaoh. So when the Second Continental Congress created a committee to design a seal for the new United States, also on July 4, 1776, it was only natural that two of the committee members—Thomas Jefferson and Benjamin Franklin—turned to Exodus. ...

Across the land this July 4, American homes will play host to backyard barbecues, the company of family, friends and neighbors, maybe all topped off with fireworks. You might say it is the American version of what the Hebrew prophet Micah had in mind when he wrote that “they shall sit every man under his vine and under his fig tree, and none shall make them afraid.”

Which also happens to have been George Washington’s favorite way to describe the blessings of liberty we celebrate this and every Independence Day.

The Tablet, America, Born of the Hebrew Bible:

America, G.K. Chesterton once observed, was “a nation with the soul of a church.” Make that a shul: As Proclaim Liberty Throughout the Land, a powerful new book, argues, “the American Republic was born to the music of the Hebrew Bible.”

Its editors—Rabbi Meir Y. Soloveichik, Matthew Holbreich, Jonathan Silver, and Stuart W. Halpern, of the Straus Center for Torah and Western Thought at Yeshiva University—make their case, in the fine tradition of our wise forefathers, by laying before us scroll after scroll of source material, showing us the Biblical thread that binds everything from the Mayflower Compact to Lincoln’s second inaugural address. ...

This idea—that Americans, like the Israelites of old, have been singled out by God and instructed to erect a city on a hill that would shine its light unto the nations—is far from a historical side note. It is, arguably, the engine that drove America to grow from a string of struggling colonies to something much grander and more consequential. The language of divine election may sound too wild for us these days, too rich with perils and prejudice; but even if we no longer wrestle with this idea as our predecessors once had, this idea still, behind our backs, wrestles with us.

Thank you for the postings. I just purchased the book. Rabbi Dr. Meir Y. Soloveichik is a wonderful teacher, check out his website for more.