ProPublica, It’s Getting Worse: The IRS Now Audits Poor Americans at About the Same Rate as the Top 1%: 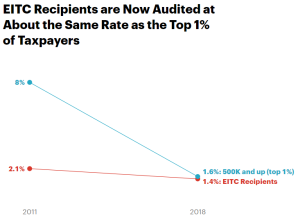 Every year, the IRS, starved of funds after years of budget cuts, loses hundreds more agents to retirement. And every year, the news gets better for the rich — especially those prone to go bold on their taxes. According to data released by the IRS last week, millionaires in 2018 were about 80% less likely to be audited than they were in 2011.

But poor taxpayers continue to bear the brunt of the IRS’ remaining force. As we reported last year, Americans who receive the earned income tax credit, one of the country’s largest anti-poverty programs, are audited at a higher rate than all but the richest taxpayers. The new data shows that the trend has only grown stronger.

Audits of the rich continue to plunge while those of the poor hold steady, and the two audit rates are converging. Last year, the top 1% of taxpayers by income were audited at a rate of 1.56%. EITC recipients, who typically have annual income under $20,000, were audited at 1.41%. ...

“While the wealthy now have an open invitation to cheat, low-income taxpayers are receiving heightened scrutiny because they can be audited far more easily. All it takes is a letter instead of a team of investigators and lawyers,” said Sen. Ron Wyden, D-Ore., the ranking member of the Senate Finance Committee. “We have two tax systems in this country,” he said, “and nothing illustrates that better than the IRS ignoring wealthy tax cheats while penalizing low-income workers over small mistakes.” ...

A new study by academic and government researchers shows that there has been a big cost to these audits: They’ve discouraged hundreds of thousands of families who might qualify for the credit from claiming it in future years.

Smitty: In terms of amounts the real tax fraud has nothing to do with the EITC. It has do with tax evasion by the well-to-do. This article contains some of the details: https://www.nydailynews.com/opinion/ny-oped-the-387-billion-solution-20181128-story.html

Getting past the 25% overpayment rate being equal in rough dollar amount to NASA’s annual budget is still a problem. Refundable Credits like EITC are creating losses we cannot sustain.

There's no way that EITC fraud even comes close to fraud by those with top incomes. As Willie Sutton supposedly said of banks, "That's where the money is."

Once again, no mention of the reason for the emphasis on EITC- the huge amount of fraud it attracts. And this is not just people who are not paying their fair share. It is outright theft, people taking way beyond what they paid in- if they paid in anything at all. IRS covered it up for decades, but the secret is out and it involves billions in fake refunds.