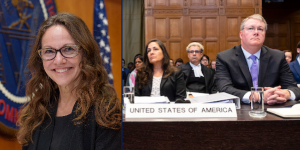 Last year, two Professors of Law at Pepperdine were tapped to hold influential positions in the United States government, a testament to our faculty’s commitment to scholarship and service. Babette Boliek was appointed by Federal Communications Commission Chairman Ajit Pai to serve as its 2018-19 Chief Economist. Donald “Trey” Childress began serving as the Counselor on International Law in the Office of the Legal Advisor in the U.S. State Department.

During her tenure as Chief Economist, Boliek has advised the Chairman, Commissioners, and Bureaus and Offices on economic issues, including a recent vote to allow wireless telecommunications companies to block unwanted robocalls. “Professor Boliek has been a tremendous addition to our team,” said Chairman Ajit Pai in his commencement address at Pepperdine Law in June. “Now that I’m seeing what she’s given up to be at the FCC, I am even more grateful for her service.”

In his role, Childress works on litigation in U.S. courts that raises international and foreign relations law issues. He also acts as a liaison between the Legal Adviser’s Office, the Office of the Solicitor General, and the Department of Justice. Over the past year, Childress has presented oral arguments before the International Court of Justice in The Hague on behalf of the United States.