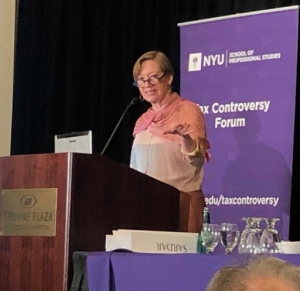 The outgoing leader of the National Taxpayer Advocate Service has formed a nonprofit to fight outside of the government for taxpayers’ rights, even as she promotes steps the advocate service is taking to broaden its own reach.

The nonprofit organization is called the Center for Taxpayer Rights, said Nina Olson, who will retire from the Taxpayer Advocate Service at the end of July after 18 years as its chief.

Accounting Today, Taxpayer Advocate Olson: 'My Role Is Not To Be a Shill For the IRS':

National Taxpayer Advocate Nina Olson delivered what is likely to be her final public speech Friday before retiring at the end of July from nearly 19 years of running the Taxpayer Advocate Service at the IRS, announcing plans to start a nonprofit to continue her work advocating for taxpayer rights, while promising future battles against the entrenched tax bureaucracy, perhaps in front of the Supreme Court.

During a keynote speech at New York University’s annual Tax Controversy Forum, Olson described how she felt free to speak out even more independently about her relationship with the IRS now that she is nearing her retirement.