WSJ: The Long Road To The Student Debt Crisis 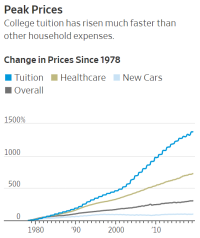 How broken? The numbers tell the story. Borrowers currently owe more than $1.5 trillion in student loans, an average of $34,000 per person. Over two million of them have defaulted on their loans in just the past six years, and the number grows by 1,400 a day. After years of projecting big profits from student lending, the federal government now acknowledges that taxpayers stand to lose $31.5 billion on the program over the next decade, and the losses are growing rapidly.

Meanwhile, four in 10 recent college graduates are in jobs that don’t require a degree, according to the New York Federal Reserve. And many American colleges are dropout factories: At more than a third of them, less than half of the students who enroll earn a credential within eight years, according to the think tank Third Way. 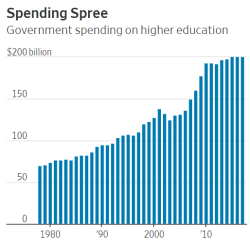 The U.S. is shoveling more and more money into a highly inefficient system that, polls find, Americans are increasingly dissatisfied with. College tuition has soared 1,375% since 1978, more than four times the rate of overall inflation, Labor Department data show. The U.S. now spends more on higher education than any other developed country (except Luxembourg)—about $30,000 a student, according to the OECD. Meanwhile, college presidents are being handsomely rewarded for the success of their enterprises: Seventy of them, including a dozen at public colleges, earned over $1 million in 2016-17, according to the Chronicle of Higher Education.

The combination of open access to schools and open access to loans turned the higher education market into a version of the Wild West. Schools of all types, banks, nonprofit guarantee agencies and Wall Street investors competed for federal student-loan dollars. In particular, the system gave colleges an incentive to maximize the tuition they extracted from students and the federal taxpayer by boosting fees and enrollment, which meant relaxing admissions standards. ...

The voucher system, combined with a lack of government oversight, created perverse incentives: Colleges could raise money quickly by admitting academically suspect students while suffering little or no consequences if their students dropped out and defaulted on loans.

The market was suddenly flooded with cheap money, which led to a surge in the ranks of college-going students. Colleges responded to higher demand by raising prices, leading Congress to increase loan limits and grants. This cycle continued throughout the 1980s and 1990s, as Sallie Mae and private banks that fronted students the money for the federal student loan program made big profits—and schools collected more money. ...

In several important ways, the student loan system has achieved the objectives set out by policy makers a half-century ago. More Americans gained access to college: The number of full-time workers with bachelor’s degrees has risen from 7.6 million in 1980 to 19.5 million today. The share of Americans age 25 and older with a bachelor’s degree reached 34.2% in 2017, double what it was in 1980, Education Department data show. And for the typical borrower, higher education is an investment that pays off: The college premium—the amount graduates earn over workers without degrees—remains at an all-time high. About 40% of all student debt goes to finance graduate degrees, including law and medical degrees, which typically lead to high salaries. ...

Each approach has its benefits and risks. Free college would relieve financial burdens on students and households, likely boosting enrollment and, perhaps, graduation rates. Surveys show that resistance to college costs are a big reason why students either don’t go to college or drop out early. But such a plan might well bring new problems. Schools would become subject to even more political control, potentially undermining the quality of the educational experience. Costs could continue to rise and strain government budgets. And without other reforms, low graduation rates could persist.

Income share agreements could lower costs and improve outcomes by tying loan amounts to objective judgments of how much the student is likely to earn from her degree. Educational quality could also benefit: Investors would presumably advance students money only for schools that were doing a decent job of teaching them. The risks are that some borrowers could end up paying far more under such a scheme than the current plan and that investors might not lend to students they consider too risky.

In any case, these changes would only apply to prospective students. They wouldn’t do anything to help people currently struggling under the burden of student debt. In February, I asked Rivlin what she thought about the system she helped to create 50 years ago. Her response: “We unleashed a monster.”

To summarize, over a quarter century 44 million individuals have accumulated $1.5 trillion of student debt, about $28,650 per account (Institute for College Access and Success, ICAS), payable at the usurious rate of 6.8% PA over 120 months (ten years). Meantime, courtesy of Wilson’s magical Federal Reserve, U.S. Government debt returns negative 2.5%, far less than zero, on Treasury instruments outstanding, meaning that Big Banks acquire funds for less than nothing to lend at rates order-of-magnitude above inflation for mathematically infinite returns.

As of 2018 – ’19, 17 million undergrads in 2- and 4-year public as well as private programs plus 3-mm post-grads = 20 million aspiring academics, are all on the hook for an astonishing total of $1.5 trillion in principal and interest, an ever-escalating rathole 5% of current U.S. GDP. Whatever Congressional and myriad other scamsters may pretend, these generationally fatal circumstances are a democratic polity’s looming kiss-of-death: Socializing fiscal disaster by declaring bankrupts’ debt payments tax-deductible is beyond irresponsible. Cheated of their birthright for a ludicrously phony mess-of-potage, unable to function as responsible adults, Gen X and succeeding Millennials will eventually pull a Tytler Calumny (qv)-- vote themselves default on multi tens-of-trillion dollar U.S. promissory notes, and walk way.

On this sad basis, we propose the following: Any college/university ("institute of higher learning", IHL) whose three-year Capital Account (endowment) returns 50% or more of said IHL's independently verified undergraduate tuition charges/receipts shall, A) Apply one-third of that return's monetary total to “forgive”, relieve or otherwise write-off existing Student Debt proportional to individuals' net outstanding liability on a seniority first-in / first-out (FIFO) basis; and B) Cease-and-desist false-promising (leveraging) economic premiums on doctrinaire PCBS implanting nothing but entitled self-conceit and vile class-prejudice.

I am shocked, SHOCKED that lending teenagers hundreds of thousands for an opaque blend of study, credentials, recreation, elitism, social engineering, and minor-league sports (not necessarily in that order) turned out poorly.

As another blogger, Professor Damodaran, introduces: "I happen to be at the intersection of three businesses, education, publishing and financial services, that are all big, inefficiently run and deserve to be disrupted. I may not have the power to change the status quo in any of these businesses, but I can stir the pot, and this website is my attempt to do so." Keep up the good work Dean!

Did the article go back as far as _Griggs v Duke Power_? If not, it's long road isn't long enough.

The student loan fiasco is a direct result of George Bush's 2005 Bankruptcy Reform law. As a "favor" to Alfred Lord, the CEO of Sallie Mae, the law prohibited student loans from being discharged in bankruptcy. This created a no lose situation for student loan lenders. They could loan money to any student at any type of college or trade school, regardless of creditworthiness, with the government paying the loan off if the student defaulted.

Yes, Rivlin, you did indeed "unleash a monster"...of overpaid, politically correct, Marxist snowflakes upon all of America while robbing the taxpayer of billions. You and your cronies are laughing all the way to the bank I'm sure.

"After years of projecting big profits from student lending, the federal government now acknowledges that taxpayers stand to lose $31.5 billion"

Whether or not federal student lending makes money or not is largely a question of what accounting framework the GAO is being asked to use at any given moment, in particular how it treats recovery rates. My understanding is that the GOP usually asks the GAO to conduct fair value cost accounting, which more or less treats defaults as nearly complete losses (akin to credit card defaults, say), while in actuality the recovery rates on defaulted student loans AFTER COLLECTION COSTS is something like90 to 95 cents on the dollar. That's because there are extraordinary collection measures afforded on these loans, including the garnishment of social security and tax refunds, and I believe the very act of defaulting itself can add about 50% of the principal in penalties and fees and such.

On the other hand, increased income-based repayment plan enrollment will push revenue from federal student lending down.

And broader scale, it's funny that when we toss trillions at the plutocrats and corporations, it's unimportant whether or not we really see a return on it (hint: we won't). But when it comes to educating the next generation... it's rather a different story.